I'm a dressage rider, but I also have western tack. 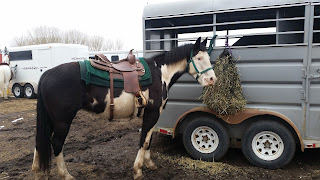 I rode in 4-H for four years in high school, and started western at that point. I've always been an English rider at heart, but western has it's uses. For one thing, they tend to look at you funny if you show up for moving cattle or cowboy challenge in a dressage saddle. For another, I essentially care less about my western saddle than my dressage one, so I'll use it if I'm going on a trail ride when it's raining or snowing. Finally, I'll admit that I don't mind the extra security of having a horn to grab I feel like the ride might get hairy for whatever reason.

As I mentioned before, when I first bought Kachina, I took her in the trailer to a huge western tack store (Irvines) before I even hauled her home. I brought in my old western saddle to get some trade-in value. I was willing to spend up to $1000 extra for a saddle that would fit and be comfortable for both Kachina and I. Other than it fitting, I really didn't care about type of saddle, appearance, new or used, etc. I don't do my most serious riding in a western saddle so didn't have a reason to be picky. Kachina is certainly narrower than your average quarter horse so I figured we would need semi-quarter horse bars. That's also what her previous owners had used on her. Besides that, I'm no expert in fitting western saddles so I pretty much relied on the expertise of Irvine's staff. I told the lady what I was after and she checked the used section for me first. There was only one saddle there with semi bars, she got me to sit in it and it felt pretty good (much better than my old one had), so we brought it out to the trailer and unloaded Kachina to try it on. The saddle fitter was actually surprised and impressed by how well it sat on Kachina and "locked" into position. She said we couldn't get much better of a fit so we ended the saddle search there. After some consultation about the value of my trade-in saddle, I walked away with only being $300 out of pocket. 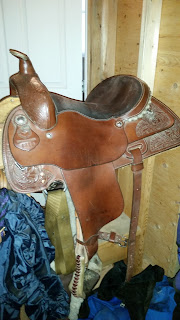 The saddle is made by Western Rawhide out of Winnipeg, Manitoba. I'm embarrassed to say that I don't know how to describe it further. The details of different kinds of western saddles are mostly lost on me. The 1475 Model doesn't seem to be offered by Western Rawhide any more. 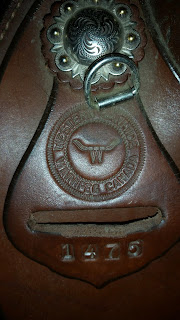 My only problem with this saddle is the stirrups. I find that after long trail rides my feet go numb and my knees hurt. I've been "training" my stirrups to rotate forward by sticking a shovel handle through them in the tack room, that's helped but it still isn't perfect. I may get a local saddler to replace the stirrup leathers and put in a nevada twist/texas roll, and/or switch out the stirrups themselves.

I have two pads that I use together. First is a 100% wool thin blanket that I put directly against the horse (like this one). Second is a thick, foam filled pad (sorry, couldn't find a link to anything quite the same). The top pad is essentially a cheap western pad. It's made of synthetic materials and nothing fancy. However, the top pad is soft and padded and I have the bottom layer to make it breathable and sweat wicking. I've had these pads forever. They are functional and I love the colour. 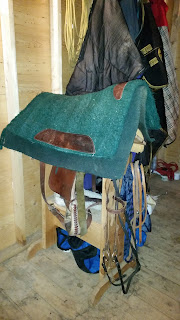 I have a nylon cinch with sheepskin lining. It works well, no complaints.

I first bought this western headstall because I was going to a 4-H show and needed a western bridle but I didn't want to spend much money and this is the cheapest one Lammle's had.
The cheapness shows, it's far from the prettiest bridle around, and the browband is always sliding around. However, it's got some good elements: The leather is solid and flexible. The headstall is so simple that it's easy to fit over a halter for trail rides. Finally, the bit clips are awesome! They are just like the clip on the end of some lead shanks. Not the prettiest thing in the world, but super functional. Changing between bits is super easy. Also I had a while when Kachina was pretty resistant to bridling, and the fact that I could put this bridle on in two parts (put the headstall over her ears, then put the bit in and clip it on) was really helpful while training her to be better at bridling. I'm afraid I don't know what brand it is. 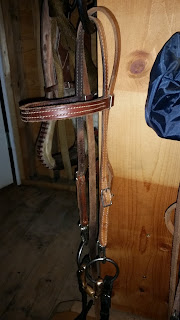 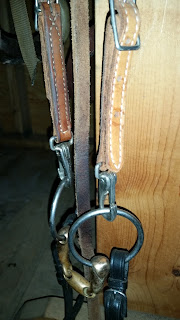 Split reins drive me a little crazy so I use an extra pair of dressage web reins with my western bridle.
Posted by AutonomousDressage