My vet's office held a client appreciation learning day last month and I went for a few hours to watch the teeth and hoof presentations.

The oral health presentation didn't tell me much that I didn't know but it did confirm for me that I will always get my vet to float my horse's teeth rather than the questionable "equine dentists" that travel around (I got taken in by one of these a few years ago despite trying to do my due diligence, they do talk a good game, but I know better now). My vet did the presentation herself and she is clearly up to date with recent research about impact of different types of tools on the health of the tooth and that's something I appreciate.


The foot presentation was very interesting to me. I never did catch the presenter's name but he is a farrier from Florida. As well as working on many competitive horses, he is also the farrier that a few veterinary hospitals refer to for corrective shoeing so he has seen a lot.


He went over a lot during his presentation but these are the points I wrote down that really struck me as new or interesting:

At the end of the presentation he did some Q&A and I asked him about his thoughts regarding barefoot vs. shod. His answer was one that I had never considered before. He said that barefoot was fine, but when you have hoof problems that you are correcting with a trim, a barefoot horse will wear down their hoof to "get their problems back" but when you trim and stick a shoe on, the problem stays fixed for 5-6 weeks. You have a much better chance of creating lasting change to the foot when you use shoes. While obviously a bit simplified that was one of the most intelligent and concise answers I have ever heard about the shoes/barefoot debate. I plan to keep Kachina barefoot for the time being as it is working for us but it will give me a better way to assess in the future if we need to add shoes. He also said that he thinks it is fine to shoe only up front or only on the hinds depending on the horse's needs.


After the talk portion he then did a quick demo trim on one of the vet's own horses. 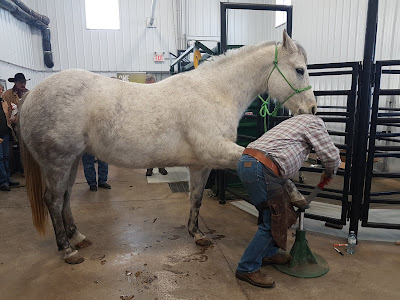 Overall it was a really good learning day and I'm glad I went! Does your vet or farrier ever put on presentations like this?
Posted by AutonomousDressage 6 comments:

I had another two lessons with Elaine on the last weekend of February.

Since the last clinic in January I have really been working on using my upper legs in my half halt and down transitions, and also using my inside rein more to supple Kachina. Both of those things have been going well.

This time around we added a few new things to work on.

First, we worked on improving Kachina's roundness and uphill balance by keeping the reins very steady and letting Kachina find the softness in the contact herself. When it worked I could feel Kachina slow down and become more deliberate with her steps. Elaine assured me that Kachina was lifting her withers at these moments and loved what it did to her walk and trot. I felt the deliberateness more than the lift so I will have to keep training my feel.

Next, I requested that Elaine help me with my upper body position. I have been pleased with the improvement in my hand and leg positions over the last couple years but my upper body still tilts forward despite years of work. Every time I think it's where it's supposed to be, video or photos prove me wrong.

First, we worked on it while posting because that's where I can feel myself that I get thrown out of whack. Elaine had me think about pushing the top of my head up into a shelf above me. That's such a simple visual but it's exactly what I needed! Somehow being told to "straighten up", "shoulders back" or "think tall" would tend to make me arch my back too much, but thinking of "pushing" into something above me had me think "up" + "strong" and that seemed to be the trick to having me keep my upper body straighter while still keeping my core engaged properly. This also tied into me holding the reins more still and letting Kachina find the release herself. As an overcorrection from my previous pulling, I now try to release too much to Kachina and I do so by compromising my own arm and upper body position. I can keep my position much better if I focus on keeping my elbows by my sides. It did feel at times like I was too stiff in the contact but Elaine said it only feels stiff in relation to what I was doing before, I still naturally have some elasticity in my arms and that's all I need so that's the feel I need to look for right now.

The other part of posting that we focused on was resisting the movement a bit by slowing my posting. Elaine had me think of tightening a screw to stiffen my hip joint and that was another good visual for me. Doing that had an immediate effect on Kachina and her trot slowed. We even did some work of posting into walk, where I kept slowing my posting down until we were walking.

Next we worked on sitting trot. I know where my upper body should be in the walk so I assumed that my upper body was correct if I recreated that feeling at the sitting trot. Wrong! Elaine had me lean back, lean back, and lean back some more before she let me know that I was straight. It honestly felt like I was leaning back in a beach lounger. Correct at the trot feels MUCH farther back than correct at the walk. I don't know why this is but that doesn't really matter. What matters is that I know the feeling I am looking for now. Having my upper body in the correct place made my legs swing forward a bit and I lost some of the pressure in my stirrups but that's okay for now. Once my upper body position feels more natural I can go back to fixing my leg. Part of the reason I can't get both correct right now is likely due to my tight hip flexors so I need to work on those. I haven't done a lot of sitting trot lately but my seat still knows how to absorb and go with the motion so it didn't feel too bad.

During the lesson, there was quite a bit of time where I was 100% focused on my position and didn't have any brain power to use on what Kachina was doing. That meant we lost the bend a few times etc. but for the most part Kachina went around very nicely even while I wasn't actively riding. I guess this is what is meant by "baseline gaits" and it seems like ours are improving.

All of these things were covered in the first lesson. The second lesson didn't add a whole lot but helped me both clarify some of these concepts in my mind and also helped me to cement the new position feelings into my body so I could recreate it on my own. We didn't even canter that weekend (which I was a bit disappointed about) but it was still very valuable.

At the end of my second lesson I took a few minutes to ask a question I have been wanting to ask for a while. I started by saying that it was a great weekend and I really appreciated working on these basics. I know that basics are so important but ultimately I do also want to show and compete. I asked Elaine what level she saw me showing in 2019. I was careful to not lead the question by including my hopes, I wanted an honest answer even if it wasn't what I wanted to hear. Secretly I feared that Elaine would tell me that we were finally ready to show Training Level, after all our lessons include a lot of 20m circles. I was pleasantly surprised when she said that we had come a long way since she first saw us; she could see us at First Level now and that Second Level wouldn't be too far away. I think that may of been a slightly optimistic response but I will take it and work to make it a reality!
Posted by AutonomousDressage 3 comments:

I am a rider who generally has fairly long rides. They average about 53 minutes long. Throughout the years I have found that Kachina does well with long warmups, multiple repetitions, frequent long walk breaks and a long cool out, all of which adds up to a long ride. I don't ride every day and my rides do have a lot of breaks which limits the physical and mental demands. Kachina has a great work ethic so the long rides don't bore her or burn her out, and they give her time to release the tension she naturally has.

Last night I got to the barn later than normal so I only had time for a quick ride before the arena lights would automatically shut off and plunge us into darkness (it's happened to me before, it's a very effective way of making sure boarders don't overstay their welcome lol). It was a good ride, we worked on getting Kachina rounded and lifted and I worked on both my posting mechanic and my upper body position in sitting trot. We did all of that in 25 minutes.


I looked at my watch after our first bit of really nice trot and realized that we were only 8 minutes into the ride! Progress seems glacial sometimes but the fact that Kachina and I could achieve similar quality work to our last lesson in only 8 minutes speaks volumes to how far we have come. I still like long slow warm-ups but we no longer need them. Mentally and physically Kachina knows her job and comes out ready to do it. My own aids are more effective and I need less time to communicate to Kachina what I am asking from her.

I tend to just do ground work or let Kachina loose in the arena on days where feel like I don't have enough time to ride, but I think I need to re-evaluate that, turns out we can have a great ride even when we are short on time.
Posted by AutonomousDressage 1 comment:
Newer Posts Older Posts Home
Subscribe to: Posts (Atom)