Ack, I still need to get caught up on real posts but the annual dressage show I organize is coming up this weekend and it has been extra busy because it is being featured in an hour long documentary(!) being made for local tv programming. I will do more write ups later but for now enjoy the show photos from the dressage day at the All Breed Horse Show courtesy of The Buckin' Photographer (photos all purchased). 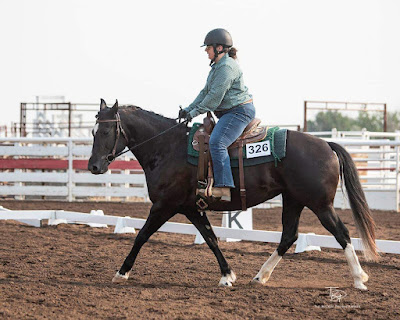 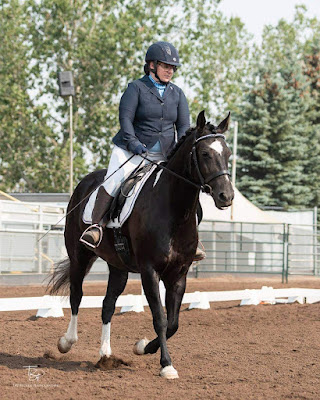 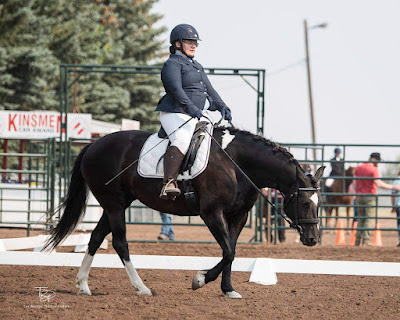 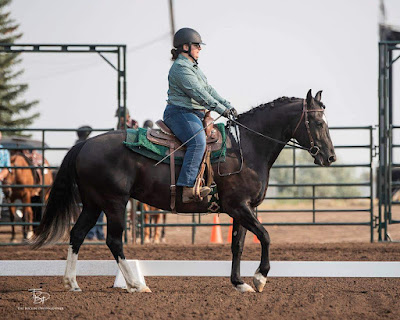 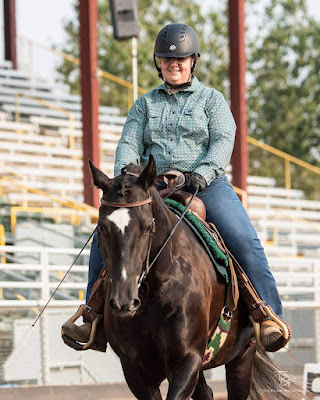 I'm happy to have photo documentation of Naia's first dressage show! Also I am totally saying these count as my maternity photos (professional photos taken when I was officially pregnant ;-) )

Posted by AutonomousDressage No comments:

All Breed Horse Show 2021 - The Atmosphere

Last last weekend (July 22-24) was a big one for both Naia and I so I am going to break it into multiple blog posts.
Today I want to talk about all the new things that Naia had to deal with at this show. In hindsight, I could have set her up better for some of them but others were a surprise for me too.
In a place without many shows, it can be tough to choose the right exposure opportunities for young horses. On one hand, I like to stick with local shows because a) closer to home if need to bail, b) not much point paying $$$ for gas and hotel to get rubbish scores when just giving a young horse exposure, and c) more friendly haul for the horse. However some shows have a lot more challenging set up or atmosphere than others for young horses. This particular show was attractive to me because of how close and affordable it was, but it was a lot for Naia to deal with. I don't think I overfaced her, and it was a somewhat calculated risk after how well she did at this jumper show (which also had a lot of people and atmosphere), but I want to acknowledge everything new that Naia faced as I think it puts important perspective on how she ultimately did. These range from the standard things that she will encounter in many future outings to some bizarre challenges unique to this weekend.
Aside, for anyone not based in the prairies who is wondering about the shape of the arena or my references to the track, this show was held at our local rodeo grounds, and the layout is primarily designed for chuckwagon races, with infrastructure to support other rodeo events and large numbers of spectators.
1. Stabling
This was the first time that I have had a stall for Naia away from home and her first time overnight at a show. Overall I think it helped us more than hurt us. Naia seemed much more comfortable in her stall than she would have been tied to the trailer. I also did set her up for success by having a familiar and experienced horse stabled across the aisle within sight of her, only having her stay over one night, giving her a continuous supply of hay, and making sure that she left her buddy more than she left him. However, Naia generally lives out 24/7 in a paddock that is roughly 60'x160' so a 10'x10' stall is a significant downgrade in her space to wander.
2. Bath
The show grounds was the first time that I gave Naia a full bath including shampoo and conditioner. I know that might sound weird but the wash stall set up at the show grounds is a much safer and welcoming one that the one at our home barn. I have gotten her used to standing in the wash stall at home and have hosed her down a couple times but the concrete at home can be pretty slippery and there is no where to tie so I intentionally waited until we were at the show for a full bath. 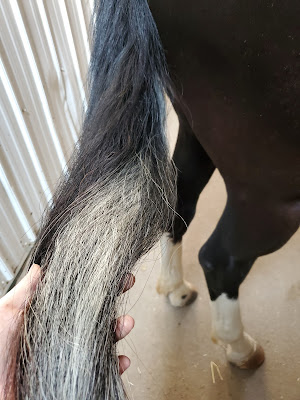 3. Judge's Trailer
We did a practice day at the barn where we had a "judge" sit at a table at C, and Naia did see a judging booth at the hunter show, but at this show the judge was seated in a big elevated trailer with a canopy. It was a nice set up for the judge but was a little scary looking. When I did my laps around the outside of the arena I tried to get Naia to see that it was just people up there (she loves people) but nobody would say anything out loud for me. I totally get that the judge is generally busy finishing the test before, but there were 3 extra people sitting on the trailer as we walked by and so I was a bit disappointed that none would reply when I was talking to them and Naia while going by. When I was a scribe and saw a horse spooking at the judging booth I always made a point to talk calmly to them so they could see we were only people.
4. Steward
I was grateful for the steward at this show. She actually checked us out both before and after our tests. She was very chatty and moved in a straightforward manner so Naia had zero issue with her sides being touched or mouth opened. The steward may have also saved me because she pointed out that my cinch was super loose before my test. I had tightened it to my normal hole but I think the stress had Naia more tucked up than normal, resulting in a loose cinch.
5. Flapping sponsor signs
The arena had several vinyl signs zip tied to the arena fences to promote various sponsors. On Thursday night I did take special care to give Naia time to come up and sniff them and figure out that they weren't a threat.
The five items above are all ones that were great to give Naia exposure to because she will likely experience them all again. But now we start getting into the more show/venue specific things...
6. Long Walk from Warmup to Show Ring
Okay, I will admit that I don't actually know what the norm is in various places for distance between warmup ring and show ring, but this felt long based on my limited experience. In reality it was 0.5km. In the past at this show, the entrance to the competition arena was on the side of the track closest to the barns and warmup ring. However this year they rearranged access so it was on the opposite side instead. That meant that there was a 1/2km walk from the warmup arena, past the back of metal stands, beside portapotties, down a narrow path behind the rough stock handling areas, through a field of gopher holes, down to a narrow gate in the track, and then back along the track to the arena. It probably wouldn't be a big deal to any seasoned show horse but it certainly felt like a challenging walk on a green 5 year old, especially when most of it was out of sight of other horses and there was no mounting block at the hitching ring so leading her wasn't even an option.
7. Footing Extremes
I'm generally not one to fuss about footing too much (mostly because that would just make me crazy), but the footing at the show was definitely one of extremes. The competition ring was nicely harrowed and was fine and a good depth for dressage (though it is track dirt rather than any fancy dressage footing). The warmup arena has a very deep layer of sand so it was one extreme of soft and deep footing. On the other extreme, due to the long walk between the warmup and show ring, I had to do some of my schooling on the track beside the hitching ring. They had flattened and sealed the track to protect it so that was very hard ground that was not unlike riding on pavement, though had the added challenge of being sloped to the inside. The pathway between the two was mostly gravel and while Naia only took a couple off steps, I'm sure it would be quite ouchy to horses with more sensitive feet.
8. Spectator stands
On one side of the arena was the grandstands, a looming expanse of concrete that extended far up, including a roof that cast long shadows across the arena. The entrance to the grandstands is actually sunk down a bit so the horses see about a 4 foot drop directly outside the arena fence on one whole side. The grandstand was essentially empty during my rides on Friday but every sound on the grounds echoed off the empty steel and concrete surfaces. On the other side of the arena were some of those metal stands, the ones that make loud noises whenever anyone moves on them. Of course for the weekend this is where all the spectators were actually sitting.

9. Bucking Chutes
We had to walk past both sides of the bucking chutes, both the front side while competing, and the back side while walking from the warmup ring. The chutes were empty so they are essentially just fences and gates, but ones that the horses only get narrow views into so they are inherently a little spooky.
10. Construction
The horse show has the unfortunate honour of being held every year one week before the stampede starts. That means that every year there are crews onsite preparing for the larger upcoming event by moving large items around, doing repairs with loud power tools, having random equipment like forklifts in random places and the like. This year COVID means a more scaled down stampede so it wasn't as bad as previous years but was still present. I was grateful that they at least weren't doing grandstand roof repairs this year like in past years though! (Imagine riding a test when a person suddenly appears on a roof directly beside the arena, 100ft in the air, and starts using a nail gun in the middle of your ride! Sadly I don't have to imagine it because I have lived it lol).
11. Chainsaws
There is a very talented local chainsaw artist. I have admired many of her pieces of work around the area but I did have to shake my head a bit when I saw that she was working on a tree directly beside the show barn during the show weekend. I mean couldn't they have hired her to come a different day? The sound of the chainsaw echoed loudly through the grandstand and could be heard clearly in the competition ring. She also restarted after a break right behind us as I was loading Naia into the trailer on the way home.
12. Drones
Admittedly I didn't actually see any drones until I was done my rides for the day but seeing one fly directly over the arena definitely had me go "are you freaking kidding me!?"
I have a lot of respect for the seasoned horses who can compete surrounded by chaos and not blink an eye. I would be thrilled if Naia eventually becomes one of those horses. However looking through the lens a five year old with limited off property trips, it was a lot to deal with, and also a lot of things that are really hard to prepare for at home.
What's the craziest show environment you have experienced?
Posted by AutonomousDressage 3 comments:
Newer Posts Older Posts Home
Subscribe to: Posts (Atom)