Tack reviews seem to be an integral part of horsey blogging. It makes sense: tack and horse equipment are expensive, many of us have limited local tack stores and so rely on ordering things online, nobody wants to spend a ton of money ordering something without reading some information about the quality of the product and how it's working for someone else.

In the spirit of maybe helping someone else in the future, I will give a quick run down of what's in my tack room, and what my opinions are. If anyone wants a more comprehensive review of any items in particular, let me know.

I'll start with my dressage tack in this post and then move on to other items in future posts. (Sorry for the dirty tack and busy backgrounds, it was freezing in the tack room that day so I snapped photos as quickly as possible)

We'll jump right in with the most important item: my saddle.
I've had my baby for 7 years now. I first started riding dressage in my old all-purpose saddle. My instructor let me ride in her dressage saddle (a Jaguar) for lessons for a couple months and I learned how a dressage saddle helped me to ride in the correct position. After I moved cities (the second time out of six) and didn't have access to my instructor or her saddle any more, I decided it was time to find a dressage saddle of my own. I was pretty open to different styles and brands and tried about a dozen different saddles, both new and used. Custom wasn't in the conversation, I just tried whatever was available in the area and I worked with a saddle fitter/dealer. My mare's high withers were the biggest obstacle (literally). Many saddles didn't have enough clearance over her withers, and the ones that did sat in a weird balance on her back where they would tip me forward or back. I exhausted all of the saddle fitter's options and was almost giving up. Luckily, in a small tack store with only about 8 consignment saddles, I found this old Jaguar. Since my old instructor's saddle was a Jaguar, I knew that the brand had a better chance of fitting Ellie. I took it for a week's trial and it fit perfectly! It was also in great shape and cheaper than several of the other options I had been looking for. 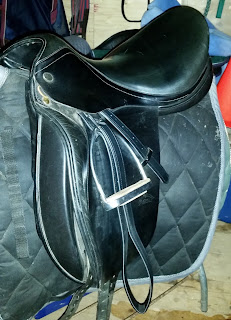 Now here's the best part: When I lost Ellie and bought Kachina, I was fully prepared to need all new tack. After I first picked up Kachina, I actually hauled her directly to a giant western tack store to trade in my old western saddle (which didn't fit me anymore) and get her fitted for a used western saddle just so I would have something to ride her in while I went through the long process of finding a new dressage saddle. I got her home, and put on my dressage saddle just to see. It looked pretty good. I figured it couldn't be that easy, took the saddle off, and went home to watch as many saddle fitting videos and read as many saddle fitting tutorials as I could (I have no access to an actual saddle fitter in my current area). I went back out and did all the tests - it checked out! I know how lucky I am to have had my saddle fit both horses so easily - it's a magical unicorn saddle! 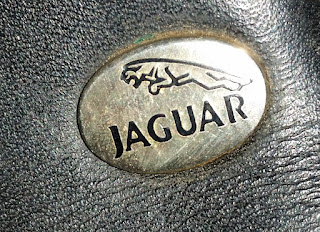 I also loved to drive around my old Toyota and be able to say "my other ride is a Jaguar" ;-)

It's hard to find a quality girth that isn't a ridiculous price. Many of the ones in the store looked nice hanging flat against the wall, but would crinkle up when I would actually curve them into girth shape. This one was the winner. It was about $80. It is made of soft padded leather on the inside and thicker leather on the outside. I bought it for my horse Ellie, and it is maybe a bit too long for Kachina (it tightens near the girth straps on the saddle pad), but it works and I love it. I wish I knew the brand so I could get another one in the future, but there's no markings anywhere on it.

I originally bought this with the thought process "I don't know if these actually do any good, but it probably won't do any harm and if it helps Kachina's back at all then it's worth a try." I had never used a half pad before and Kachina didn't have a sore back, but I bought it in the first year of having Kachina, where I was having some trouble sitting her canter, I was lamenting the fact that I couldn't get a professional fitter to super extra make sure my saddle fit was perfect, and there was one ride where Kachina was acting totally unlike herself and I wondered if there was any pain (it was only one ride and there has been no indication of any problems before or since).
I've used it for every ride since I got it and I've been happy with it. Like I said, I didn't really have problems before the pad so I don't know if the pad has had much of an effect, but I love it for my peace of mind. I tried a Thinline pad for a bit before and I found it always slid out of place. I love how the Ogilvy squishes down and stays exactly where I put it.
Amanda at $900 Facebook Pony did a great post about the actual science of half pads (here) and that has cemented the Ogilvy's place on my horse's back.
Note: for any Canadians who want one of these pads, I found that buying directly from the Ogilvy website is the best price and shipping deal. 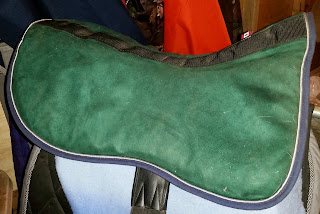 This is where I'm a collector. I haven't yet found the perfect dressage pad.
The first problem is colour. Why do dressage pads have to come in such boring colours? I know it needs to be white, gray or black for shows, but I want more fun colours for schooling and clinics. Also, do you know what colours of saddle pad do not look especially good on a black and white overo horse? Black or white, especially with contrasting piping or banding like so many dressage pads have.
Some dressage pads do have better colour options for my particular horse, but they don't seem to be of as nice material, size or shape.
This is not a serious problem, and entirely a superficial one, but I will probably continue to obsessively look at and buy new saddle pads for the foreseeable future.

For $40, these are awesome. Up until a month ago I had been using the stirrup leathers that had come with my saddle. Unfortunately they started to really stretch and it seemed like every couple months I would have to go up another hole. They also were too long to start with and so had too much of a "tail". I got these non-stretch ones in a correct length and they are just what I needed. They aren't real leather, but they look good. When I first unwrapped them I was worried that they would be too stiff, but I haven't had any issues with that. They also have neat visible numbers next to each hole which is very helpful for knowing what hole I should be on (I know many stirrup leathers have this feature, but my last ones did not).

(mine was labeled just as the Micklem Competition Bridle, but it does have the fancy stitching like the Deluxe)
Kachina has a bit of a weird shaped head. I used to use a traditional dressage bridle, and it kind of fit, but it was on almost the tightest hole around the crownpiece but on the very loosest hole for the noseband and throat latch. This made it a bit awkward. Kachina also has a tendency to be very fussy with her mouth. After reading some online reviews, I decided to try a Micklem bridle. Since Micklem bridles fit so differently from traditional bridles, I've heard that either your horse has the right shaped head for it, or they don't. Luckily I was able to get a local tack store to order the Micklem bridles in and let me try one on Kachina before buying. I guess Kachina has a Micklem shaped head. The upper jaw strap is on the very loosest hole, but that seems to be relatively common. Otherwise it fits pretty well. She does seem to be a bit quieter with her mouth in this bridle. Also, I like that there's not so many different pieces of leather in the way for putting the bridle on.

I have two of these. SHE makes great designs, I love the look of the long beads they use in comparison to some of the other beaded designs on the market. The prices are also very fair.
The first one, the blue one, I bought as one of her stock browbands at a tack sale a few years ago. I love the design, but the size and shape didn't work for Kachina, and the blue actually overshadowed her blue eyes instead of enhancing them.

The green one I had made for Kachina custom after meeting with SHE at a horse show last year. Due to a mail snafu, I didn't get it until after my last show of the season, so I haven't actually used it yet. I can't wait to see what it looks like in action though.

I've tried a few different bits with Kachina. She will open her mouth no matter what bit I use (she'll do it in a halter too so the bit isn't to blame), but I've found a few preferences she seems to have.

1. Eggbutt instead of loose ring - I've heard that eggbutts are better for keeping the bit quiet in horses who are busy with their mouths, this seems to hold true for Kachina
2. Thick - I don't know if it's her pink skin or what, but Kachina seems to be extra sensitive on the corners of her mouth and thicker bits are better

I've ridden her in both double-jointed and single-jointed snaffles, and that part doesn't seem to make an appreciable difference. Right now I'm using a super thick single jointed eggbutt snaffle. She goes fine in it, but if I find a double jointed snaffle that is equally thick I will give that a try (all of the double-jointed ones I've seen have been thinner).