This weekend was my first show of the 2016 season. It was the first of a three part Carrots and Cocktails dressage show series. The show was held indoors at a beautiful facility near Calgary.

The show series isn't recognized, but it's still a bit of a step up from a basic schooling show. The atmosphere was fairly relaxed and there were no stewards etc, but proper attire and braiding were expected and it was a fair sized show with 50 horse and rider pairs entered in everything from walk/trot all the way up to Grand Prix.

I went up with two friends from Medicine Hat (one riding, one who came to watch and support). We opted to just show one day to save on costs. We drove up Friday evening after work, showed Saturday, and drove back Saturday evening.

We took my trailer and my friend's truck and truckbed camper. The camper was great as we didn't have to pay for a hotel and we were on the show grounds. However, we were apparently the only people who were both a) from far enough away that we couldn't sleep in our own beds, and b) too cheap for a hotel, because we were parked alone in a half deserted parking lot on the corner of the property. Every noise and movement had me at full alert and it didn't exactly make for a restful sleep. Not to mention that we were camping in Alberta in March with no heat or hookups (it was actually crazy nice weather for March this weekend but it still got down to around freezing overnight), I'm glad I had a good warm sleeping bag. This was the first real towing test for my friend's truck and the combination of the trailer, camper, 2 horses, and 3 people seemed to max out it's capabilities. I've never spent that much time with the accelerator literally floored as I did this trip. I think we'll have to go back to using my SUV for the next show even if it's a bit more expensive for fuel and can't fit a camper.

It was hard to achieve good show turnout. I did my best with Kachina, but it's March and she's an outdoor horse so there's only so much that can be done with winter hair and no ability to bathe her. I got the worst of the spots off her white parts with a combination of show sheen, whitener spray, and baby wipes, but she still wasn't exactly glowing. At least I was able to tidy up and braid her mane and brush out and bang her tail (her tail is actually getting quite full and nice). She's starting to shed out now so we'll look better for the next show. 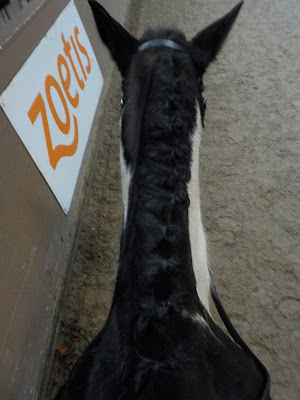 Onto the actual rides! In the spirit of getting good experience, I had signed up to do three tests, Walk/Trot A, Walk/Trot C, and Training 1. (Note to Americans, Equine Canada now uses the USEF tests for Training to Fourth Level, but has their own Walk/Trot tests A/B/C/D instead of Intro, tests can be found here). The media of me riding is on a different camera so will have to post that separately.

As it was an indoor show, it was formatted in blocks of 6-8 tests with 20 minute warmups before each block. I was in the first block of the day for both of my Walk/Trot tests (just two rides in between). Kachina was pretty antsy when I took her out of her stall and wouldn't stand still for me to tighten the girth or mount up. However, once I was in the saddle I was able to get her listening to me right away. The fact that I was confident enough to mount up right away in a new place and get to work shows how far Kachina and I have come since last year. We did some lateral work as a warmup, walked around the arena to take a look at the flowers and judge's table, and did some circles and figures at walk and trot. Kachina was pretty relaxed and was working well so we didn't do too much and settled in to watch the riders before me go.

Our first test started with an extremely crooked halt. I think all our recent lateral work has temporarily compromised our ability to be straight. Throughout our 3 tests we had one crooked halt and one straight one in each. We will definitely be adding straight halts onto the list of things to work on at home. (At this point I'm not even worried about square, just straight, as in not taking 2 giant sideways steps with her back end)

The walk/trot A test specifies that trot must be rising. I was a bit worried about that as our sitting trot has been better and we've done more of that lately. However even while I was posting, Kachina kept a nice trot and came back to me relatively quickly the few times that she started to get fast. Because of this I opted to post the trot for my other two tests as well. Our trot work isn't consistent, but she had as nice of a trot at the show as she does at home and I was super happy with it for all 3 tests.

Free walk was the biggest disappointment. Normally we have a great free walk, nice and loose and swinging, but not that day. In the first test, the free walk was across the diagonal and it was actually pretty good for most of the way, but then as soon as I started to pick up my reins at the end she broke into trot and ruined it. I think that messed with me mentally, because for the other two tests it was even worse, she kept wanting to trot so I rode the free walk really tentatively and we ended up with a short stride and short neck and we still had some jigging. In every test I rode, the free walk is a double coefficient, so getting one 4 and two 5s on that movement really hurts. It drove me a little crazy because in each test, as soon as I dropped the reins after our final halt at X, she gave me a super nice free walk, why couldn't I get that where it counted! On the bright side, I know we can improve our free walk scores for future shows. I just need to do more transitions between free walk and medium walk at home and be more consistent with my aids.

We got around 61% for both Walk/Trot tests. The scores put us 1st out of two for Walk/Trot A, and 3rd out of three for Walk/Trot C. Even though they weren't exactly big classes, we got above 60% so I feel like we earned those ribbons :-). I thought the judging was extremely fair and I agreed with all the comments. We had a pretty equal mix of 5s, 6s, and 7s. I was actually happy to see that because it means we can improve our score a fair bit if we get rid of some of the 5s. I was amused to see that the judge said in her comments that we need to have more impulsion and be more forward-thinking. Kachina is the Queen of forward-thinking, unfortunately forward can come at the expense of control and relaxation. I opted for control and relaxation for my first rides, I know that made our paces a little dinky, but I also know that we have a ton of impulsion in the bank that we can add in as soon as it won't compromise our balance and tempo.

After Walk/Trot was done, we had a break of a couple hours so I untacked Kachina and put her back in her stall to chill and munch on her hay.

Our warm-up for our Training Level test was similar to our morning warm-up, but we did some extra practice of free walk and straight halts, and we added canter to the mix. Going into this show I figured our canter would be pretty terrible which is why I just did the one Training test (and test 1 where the canter patterns are short with no double coefficients). It took three tries in warm-up to get the correct lead in the correct place for left lead canter, and there was some flailing in the transitions in both directions. However, once we were in canter, it was pretty nice.

Despite the work in warm-up, we had the same problems in the test with halts and free walk that we had that morning. I pushed for a bit more impulsion in the trot because of the judge's earlier comments. That resulted in similar scores but new comments of "nicely forward", "uneven tempo" and "tight neck", which made sense as I had to strongly half halt her back from running a few times. The right lead canter was flailing and unbalanced and earned us 5s, but the big surprise was the left lead canter which got a 6.5 and a 7! I think the fact that the transition was in the far corner from the judge probably saved us a bit but I'll take it!

My score on Training 1 was 60% on the dot! I was thrilled! This was only the second ever show for Kachina and I. I didn't feel ready but I was secretly hoping just to crack 60% on at least one test. The fact that I got 60% on all three tests was more than I had hoped for. Also, getting 60% on training in our first time out this season tells me that training is a suitable place for us to show for 2016. It was a big class so we had to leave before the placings were decided. There were some very nicely ridden tests so I don't expect to have placed but I'm totally okay with that. (Edited to add, I called the show organizer and we ended up 7th, so just out of the ribbons)

In the afternoon, the show lived up to it's name and had free Carrots (freshly baked carrot cake cupcakes) and Cocktails (wine) upstairs for everyone. They also had a range of cheese, fruit, meat and other hors d'oeuvres available. It felt so classy and I think they need to have this at all horse shows! (though it probably wouldn't help dispel the myth of dressage being a snobby, rich person sport haha). Since we were driving back right after, I couldn't really take advantage of the wine aspect but I thoroughly enjoyed the cheese and fruit.

Overall it was a great way to start the show season and it gave me good feedback of what to work on. We'll be back to the same venue for Carrots and Cocktails II in April, this time I'm excited instead of terrified =)