This is late but I still want a record of it so here is the details about how my show went on the weekend of June 16-17. Sorry, this is long and wordy but again it is a lot for my own records (and it's late enough already so I didn't feel like breaking it into parts)


I had the day off work so luckily I had time to ride Kachina, bathe her and pack all my gear on Friday before leaving.

My ride was great. I hadn't ridden in a few days so she was pretty up and it took some time to focus but once we got into a groove everything we've been working on over the winter was there and accessible. I was also able to add some new work without losing too many marbles. For instance, this was the first ride of the year where I practised canter lengthens. I will reiterate that practising a movement for the first time the day before debuting it at a show is not the recommended plan but it kind of worked. I've definitely made some mistakes in my riding before but I feel like we are on a good path now. The fact that we can pick up after some time off, get as good of quality of connection and transitions as we are capable of, and be able to push the envelope to boot was pretty nice.

The bath was a little more eventful than I wanted it to be. I was so excited to use the wash rack in the barn complete with hot water. However once we got in there after our ride Kachina started slipping on the wet concrete like crazy. There was a bit of a dicey moment there as I was trying to keep Kachina calm and stable while also getting the water turned off. That flooring isn't normally that slippery; I think it was just that Kachina's bare hooves are so extra hard from they dry weather that they had no traction on the hard surface. We ended up doing an abbreviated rinse with cold water out on the grass instead.

I then turned out Kachina briefly while I packed my stuff and loaded the trailer (of course she rolled multiple times). We left pretty much right on schedule and had an uneventful haul to Claresholm.

Once we arrived on the show grounds I got Kachina settled, brought her on a hand walk, and trimmed her mane and tail (first show of the season).


I woke up Saturday morning to find that it had rained a lot overnight and was still coming down steadily. The show ring was indoors but the only warm-up was outside so this was not good news. I braided Kachina quickly (and badly, tried using braideez braiding wires but the lengths were off and I didn't have time to redo). We then tacked up and went for warmup. I was the very first ride-time of the show, but due to a smaller number of entries that was at the very reasonable time of 10:00am. Since I was up first and like a longer warmup than many people, we had the warmup ring to ourselves for the most part. My warmup coincided perfectly with a short break from the rain. The footing was very wet and heavy but there was no standing water and the traction seemed good. We had a productive warmup and were actually able to practice all the test elements before I went in to perform them for the judge.


This test felt fine but not great to me. We made no mistakes but it felt like it was missing some polish. I was surprised that this ended up being our high score of the weekend. I was also a bit surprised to see many comments asking for more active and more energy. I know we've made big improvements to relaxation and rhythm and had felt like we had started to work on allowing the gaits to be bigger but I took this feedback to mean that we needed to amp this up more. I do try to read my tests as soon as possible in a show so I can try and tweak things for subsequent tests, but that can have negative impacts as well. I was super happy to see that none of our movements scored less than a 6.0 for this test, that is a new achievement for us!


It was raining hard again by this point so I mostly waited inside on Kachina until our next class:

The Dressage Equitation division is one I've competed in before. You do a flat group class and a Training level test and your scores are added together to determine the winner. This was the flat class. There were only two of us in it. The judge had us walk, trot and canter both directions and also demonstrate diagonals, free walk and stretchy trot. This class showed me that I don't work on the rail enough at home - along the long sides Kachina would start to drift off the rail, likely expecting a circle, this was a reoccurring problem at the show so I've been trying to do more straight lines at home ever since. I felt like a rode pretty well in the class and was happy with how we did but I know leaning forward and having open hands are bad habits of mine so I don't dispute those comments.


After Dressage Equitation finished I went back out to the rainy warmup to practice some lengthens in preparation for our First Level debut! This was Kachina's first time ever showing at First Level, and my first time competing in the level at a recognized show (competed in schooling shows years ago with my last horse). I knew we weren't confirmed at the level but it was a big deal for me to finally just feel like we could attempt it!

Obviously 58% is not a great score, but as a debut it tells me that we are ready for this work and I just need to keep working on the level. I was actually pretty happy with my score, especially as that was despite an error where I tried to skip half the movements in the test for some stupid reason. This was our first test with lengthens and we got 6.0 on three out of 4 of them (both trot and canter). Clearly room for improvement but I'm happy we aren't way out to lunch on the movement.


Finally, after a long morning, I untacked Kachina and put her back in her stall for lunch and a well earned break. This is also when I picked up and reviewed my morning tests. I saw the comments about needing more activity so I planned to increase the energy for my next test. However, once I got back on again I found that I didn't have a lot of horse. I know that 4 tests in a day is more than many people choose to do, but Kachina and I have done it many times before. She is not a horse who generally tires out, and in fact usually does better as the day goes on. She has shown me her almost boundless energy multiple times before, both in dressage rides and long days in the saddle on demanding trail rides. In almost 4 years of ownership this is the first and only time I've ever felt Kachina tired. I think the heavy wet footing in the warm up arena was a big factor that drained her energy. It was unfortunate timing though as I was trying to push for more forward in my test and for the first time ever, my go button didn't work. 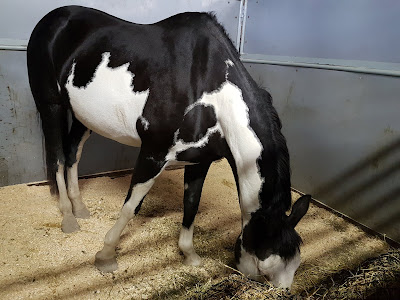 I was so focused on forward on my sluggish horse that I clearly lost some balance and connection. We picked up the wrong lead to the right (which I fixed but not before it impacted the scores for two movements), and also had a poor stretch trot circle. I could feel it was a bad test, however other bloggers have said before that they don't mind having new problems, they just don't want to repeat old problems. Well that was us in our last test of the day so I guess that's okay.


Sunday dawned bright and clear, but the ground was pretty saturated with rain. The entries for the morning Prix Caprilli class all scratched so I found myself again being the first rider of the day. The warmup was sloppier than it had been the previous day so I kept my warmup fairly short and basic before going in for T2.

This test felt really good to me so I was a bit disappointed in the score. It felt representative of the work we do at home which I thought was where we were supposed to be. While this score was lower than Training 1 on Saturday, it was mostly just less consistent. My 62.4% then was made up of almost entirely 6.0s and 6.5s, while this time around I got four 5.5s but also four 7.0s. I'm glad I had a clinic with the judge after the show because otherwise I would have been confused about what I should be doing differently.

I felt ready for my next test so I just parked at the rail until my ride time (also due to the sloppy warmup and not wanting to tire Kachina out again).

This test also felt pretty good to me. Kachina was against my inside leg a bit in on the long sides and corners though which the judge clearly noticed. We'll work on that. This test scored mostly 6s.

We took another long lunch break and Kachina chilled in her stall before the afternoon. By the time I got on again the warmup was starting to dry a little bit but was still sloppy enough that we couldn't work well on lengthens or leg yields but Kachina was doing well otherwise.

My final test of the show was First Level Test 2. I have never shown this test before which means I have never done it in a full size court (arenas at home are only short court length). This is totally my fault for not figuring out the geometry better but I realized too late that our leg yields are not nearly steep enough and I struggled to get her all the way over before the letter. This is something I can fix so its good to know. I also struggled to keep Kachina straight during the canter lengthens (pushing against my inside leg again). These are still fairly new movements for us so I am okay with the mistakes. However, one thing that really sucked was seeing that we got a 4.0 on the stretchy trot circle that I had been so proud of! A 4.0 on a double coefficient really does make a difference to your score. I had actually scored badly on my stretchy trot all weekend but didn't know what I was doing wrong. I've since learned so that will be the subject of a future post.


My goal for the weekend had been to get over 63% on a test to qualify for year end ADA awards. Unfortunately I was 0.4% away from achieving my goal.

While the scores weren't what I was hoping for, I did do better than expected on the placing front.  Sadly for this satin aficionado, this show gives money instead of ribbons for classes. Ribbons are reserved for divisions only. However, I did get cash for almost every test, and ended up as Grand Champion for Adult Amateur Dressage Equitation. I narrowly missed Reserve Champion for Training Level but surprising clinched Reserve Champion for First Level! Granted, some of the divisions were pretty small, but there was still competition so I'm pretty happy for my ribbons. And, as I wrote before, I was thrilled with my awesome horse :-)