Note: previously I referred to this saddle as a Schleese Wave, turns out that the label was incorrect and it's actually a Schleese Link, it's still the same saddle I'm talking about though.

When we last left off on this saddle search adventure, I had tried a Stubben Maestoso that fit Kachina but not me, so then I got a trial of a larger Schleese saddle...


First off, can I say how ridiculously exciting it is to get a parcel containing a saddle sent to you?! Even if it was just a trial :-)

My next order of business was to try and find my spare set of stirrups so I could do a back to back comparison of two saddles without having to take the time to switch stirrups. That ended up being a lot longer job than expected. I opened up my spare bin of tack and horse stuff in the garage to find that a bottle of show sheen had exploded over everything. Not only were all my shipping boots etc. in need of a good washing, but the moisture trapped in a closed container had caused my spare bridles to go super moldy! I've heard of mold and mildew on tack before, but I live in such a dry area that it's never ever been an issue for me. I was shocked and disgusted by the fuzzy grey sight I was faced with. So anyways, a quick look ended up being a couple hours of sorting, cleaning and disposing of horse stuff. After all of that, my spare stirrups weren't even in that bin! I still have no idea where they got to.

It's been ridiculously rainy here, so before I took it out to the barn, I tried it out at my house by putting it onto an overturned rain barrel (every rider needs one!). The first thing I noticed was how high the pommel sat above the barrel. I had been told by the salespeople that this saddle was currently adjusted to be quite narrow, but this really showed how narrow it really was.


The fact that the pommel was sitting so high off the barrel meant that the saddle balance was off and the pommel was actually higher than the cantle. I experimented with putting various "riser pads" (patio cushions) under the back of the saddle to even it up. By sitting in the saddle in different arrangements on the barrel, I could see how much a small change in saddle position could effect how it felt to sit in it. This is part of what makes saddle shopping so difficult. The way a saddle feels on a block or on one horse might feel totally different from how it feels on a differently shaped back. Also, it's really hard to know if a not quite right for the rider saddle fit can be fixed with some minor shimming or re-flocking or not.


Anyways, general verdict from playing around at home was that I was decently happy with how the saddle fit me (though it wasn't the angels singing kind of magic that Schleese seems to want you to believe), but I was less confident about how it would work on Kachina.


Sure enough, when I did get out to the barn to try it on Kachina, it was a horrible fit. The saddle was too narrow, but I knew that could be adjusted if needed. The bigger issue was the back of the saddle. It was like the saddle just rested on top of her back instead of going around it. There was one point where I had the saddle girthed up and Kachina started pawing; each time she pawed, the whole back half of the saddle would wag back and forth over her spine. Another problem was how the panels got thicker near the shoulder. I'm sure it's a purposeful design, but it didn't look like they would sit well on Kachina even if the tree was widened. I had hoped that the saddle would fit well enough where I could at least put on a half pad and do a short ride to see if I liked the feel and whether it was worth looking into other Schleese saddles. However, the fit was so bad that I didn't feel comfortable mounting up at all. 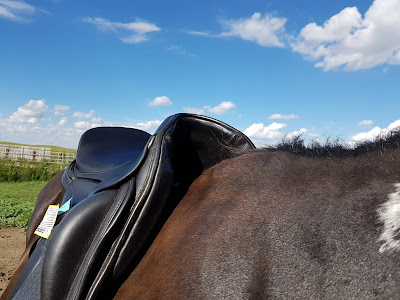 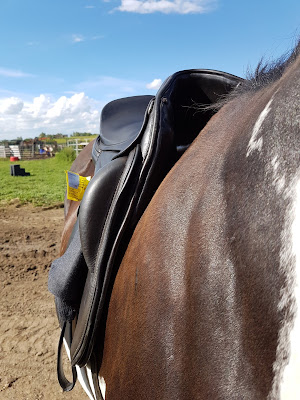 With that, the Schleese went back and the search continued. I was about to say I was back at square one for the saddle search, but that's not really true. Every saddle I look at gives me more information about what does and doesn't work for me and Kachina. It's a pain doing multiple saddle trials, especially from a different city, but eventually I'll narrow down what we need *here's hoping the answer isn't something new, custom, and $$$$!*
Posted by AutonomousDressage