I'm sure many of you are familiar with JenJ and her jousting hubby and horses over at Wyvern Oaks. There's also Shimmer-E and her trick pony who apparently joins Mongolian hordes from time to time (though unfortunately I missed their performance). These ladies definitely get props for participating in such cool events. I can't compete with that, but I can be a spectator!

This past weekend, the SO and I took a road trip on Sunday afternoon to the Brooks Medieval Faire. We had never been before and so weren't sure what to expect. It was pretty cool. There was some pretty intense fighting between armed and armoured knights on the ground, and I loved people watching and checking out some of the fantastic costumes.

More to the horsey point of this blog, there was also a jousting tournament. There were jousters from all around the world, Alberta, Quebec, USA, England, France, and even Australia. We were there for the fourth and final round of jousting for the weekend. Enjoy some photos and videos: 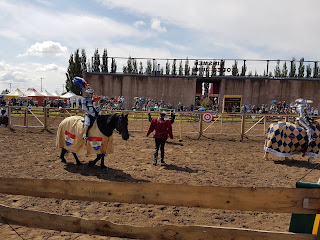 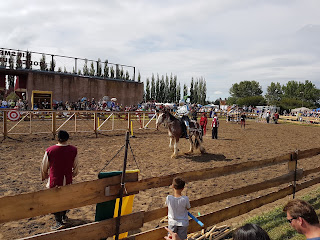