Okay, finally the rest of my show recap...

So, how did the show go after our roller coaster start?

- the facility was lovely - the barns and indoor arena were great. The outdoor warm-up arena was very sloppy on Saturday morning, but the crazy wind and sunshine dried it out in record time, so by the afternoon it was actually nice footing (seriously, I couldn't believe that it did days of drying in only a few hours, it didn't look like like the same ring at all)


- the show was very well organized. The organizers were very friendly and everything ran smoothly.
- my volunteer duty for the show was super easy - just over an hour long shift as runner, and we only had to carry the tests about 20m because they had set the scoring office up really close to the judge
- it was a small, low-key show. Last year it was a bigger show, but renovations at the facility caused them to downgrade from a Gold show to a Bronze show and limit the number of entries to 40. Since it ended up being the weekend right after the big Calgary Gold/CDI 3* show, it was less popular and there were only 22 of us entered in the end.
- It was a perfect first introduction to a recognized show. Watching other rides, I could see that there were a lot of inexperienced horses and riders at this small show, and so our issues didn't stand out in a bad way. The judge assigned a lot of low scores where they were called for, but she was patient and understanding.

- before this show, Kachina and I had only shown Walk/Trot and Training Level Test 1. This show didn't offer Walk/Trot so it ended up being a forced move-up to all of Training Level. We rode T1, T2 and T3.
- since I wasn't able to ride much before the show, our first time doing some of the movements from T2 and T3 like the stretchy trot circle and the trot loops was in the warm-up at the show! This is not how things should be done. I feel bad that I wasn't more prepared, but Kachina did quite well with both movements as a first time (we've done the concepts before, just not the exact movements)
- it was far from perfect, but there were a few times in both the warmups and our tests where I made smart choices as a rider to make a correction or change an exercise. In the past I have reverted to being more of a passenger in a show environment, so I'm glad I'm starting to be able to change that.
- canter transitions were a low point of the show. We got our leads on Saturday, but the transitions were very rushed and hollow and involved some head flailing. On Sunday, we had head flailing and wrong leads. In my T2 test on Sunday, we got the wrong lead going both ways!

- Dressage Equitation is a new program by equine Canada. This is the first show I've seen with it offered but I decided to give it a whirl.
- The division involves two parts - a flat class with everybody, and an individual test. The scores from the two parts are added up to come up with the overall placing.
- The flat class was on Saturday afternoon, and we rode our tests for it on Sunday.
- There were only two of us entered into the Dressage Equitation. Since you don't need 15 minutes to judge a flat class of two people, the judge used most of the time to give us feedback. She almost made it into a mini lesson by telling us what to work on. She wanted me to post the trot instead of sitting, shorten my stirrups a hole, and really try and encourage Kachina to stretch down. As she said herself, it was a very unconventional way of holding the class, but I really really appreciated the feedback.

- There were a couple talented pro riders who were at the show to give exposure to their very nice young horses at low levels, a couple of these got marks in the 70s. However, in general, marks at the show were low. In the AA Training Division, marks ranged from a low of 40% to a high of 63%. Mine were low too, I'm a bit embarrassed to share my scores, but I think it's important to share both the good and the bad
- Training Level Test 1 - 55.9% (general tension throughout) - 3rd/4
- Training Level Test 3 - 60.5% (I was actually pretty happy with this, both the test and the score, I reached my goal of scoring a 60% at a recognized show) - 2nd/3
- Training Level Test 2 - 54.2% (blew both my canter leads) - 2nd/3
- Dressage Equitation Training Level TOC - 58.7% (blew the right canter) - 1st/2

- bag of carrots - everyone got a full bag of carrots when they checked into the show office, Kachina appreciated them
- money prizes - just $10-$25/class but I'm not used to that so it was cool!
- hair clip - I took my $15 3rd place winnings from one class and used it to buy a new hair clip 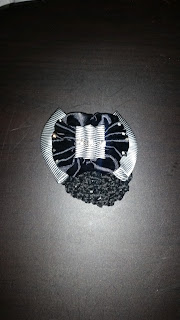 - silent auction - there was a silent auction to raise money for the club, I bid on a few different things and ended up coming home with a stock tie and a book


- fancy ribbon! - between the flat class and the TOC, I was Grand Champion of the Dressage Equitation division, which came with a very nice ribbon :-) (Which I was extra stoked about because there were no ribbons for individual classes, only for division champs)


In general, I'm glad I ended up going and not turning back for home on Friday night. There's definite room for improvement but most of it is on my end with how much prep I do and how I ride. The scores might not fully reflect it but Kachina was a champ. I'm gaining a lot of confidence with her in new places and learning how to read her to see what she needs. I'm excited to work on things at home and come back better to the next show.
Posted by AutonomousDressage