I've heard that when looking for a dressage prospect, you should look for a great canter, because it is easier to improve the trot. I failed on doing that. Part of what attracted me to Kachina is her dreamy trot, and I still watch in awe when I turn her loose in the arena. I got some photos (video stills) the other day so I'm going to shamelessly share them :) : 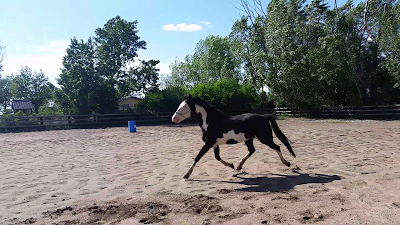 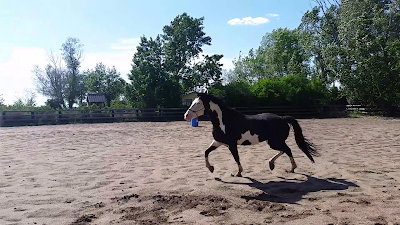 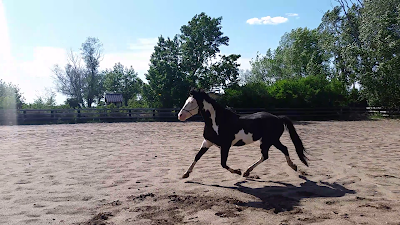 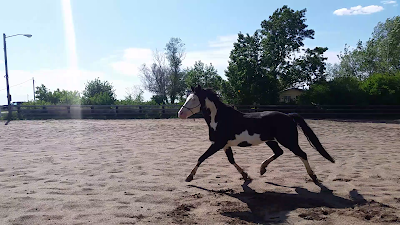 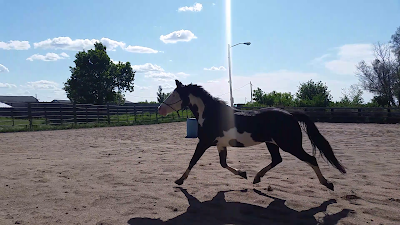 It had rained recently and the arena was in the process of drying up, but nobody had harrowed or ridden in it yet so it was perfect for showing Kachina's footprints. I was a nerd and used it to analyze her stride: 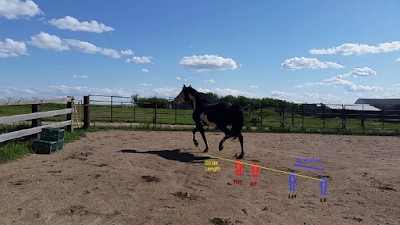 (she was slowing down on her approach to the gate so I think that explains the difference between the right and left, she's not off)
This seems like pretty impressive overtrack to me, but I may be a bit majorly biased, so you tell me. Also, she clearly isn't carrying a rider here so I know that makes it easier, but I'm still excited to ride an extended trot on her someday.

Then there's her canter... I can actually get a nice true canter out of her sometimes, but when she's excited, loose and running wild, it's not nice, at all. Watching it is the weirdest thing. I need to watch it on video at super slow motion to even halfway make sense of it. She sometimes looks like she is switching between true canter and cross firing, but when you look closely, she seems to extend her period of suspension and shorten the period between foot falls so that instead of a nice 3 beat rhythm, it's more like she leaps forward and then has all four legs land almost at the same time. When she does that, it's easy for her to switch up her leg order, so she'll do a weird combo of stride true canter, stride with back legs moving at the same time, stride of cross-firing, leap with all four legs hitting together, stride of counter canter, etc. She's special 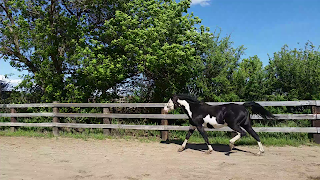 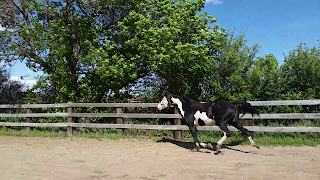 The above two photos show her "canter transition". Apparently to go from trot to canter you hold one back leg up extra high so that the front diagonal pair foot can land and push off before the back foot lands. I don't think that's the ideal method