Yesterday my brother came out to the barn to borrow my truck. My brother is pretty allergic to horses so he generally stays far away. He had never met Kachina, and the last time he was near a horse was probably 15 years ago. As he was at the barn anyways, I asked if he wanted to come around to say hi to Kachina. He did, though stayed well back from the fence to avoid the horse hair. He then said he wanted to ride a horse someday, "just for the epic Facebook photo". I told him that could be arranged, and 20 minutes later he was mounting Kachina in my western saddle.

We took the obligatory photos for Facebook, but he actually rode for at least 15 minutes. I was impressed he even got on, much less stuck with it for that long. 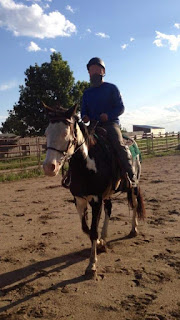 I had Kachina's halter on under her bridle, so I started by holding the end of the lead rope and having Kachina circle around me. My brother was sitting in the saddle but the reins were loose and I was the one directing her. We then progressed to walking around the arena, with me walking beside them, but having my brother use his legs and reins to get her to halt, walk and turn. I asked if he wanted to try trotting but he figured the walk felt unstable enough and he wasn't interested in going any faster.

Kachina was perfect for the whole thing. She listened to both me and him, stayed relaxed, and didn't put a foot wrong. Kachina's isn't really a beginner's horse, but I'm proud that I can stick newbies on her for pony rides every now and then. I've had a girl I volunteer with, a couple friends, and my 5 year old niece ride her in the past and she has been equally good.

Does your horse do pony rides for friends and family?
Posted by AutonomousDressage