On Saturday (two weeks ago) was the Cypress Hills Wish Ride. This was the 4th year for this charity trail ride but it was the first year I've been able to attend.


The ride takes place on a historic ranch in the Cypress Hills. The Cypress Hills are a cool area. They are one of the only places in Canada that were not covered by glaciers in the last ice age. It means that the landscape is a high elevation plateau of forested slopes surrounded on all sides by grass prairie. Despite being a relatively small area, the hills are home to some cool plant and animal species including the highest concentration of cougars anywhere in North America. I've been to the Cypress Hills before to hike and boat, but this was my first time riding there.


The day started early with the drive out there. The plan was to go with my friend and her daughter, but they had to cancel at the last minute so I ended up on my own. The ranch is fairly out of the way, as in 40km from the nearest pavement out of the way. The trip had very little traffic but I got to see white tail deer, mule deer, antelope, coyotes and a ridiculous number of birds of prey along the way (no cougars, despite them being around, it is super rare to actually see one). When I rounded the last hill I was surprised at how many trailers were at the ranch. In all about 85 riders participated, coming from all over Alberta and Saskatchewan (the people parked next to me were camping and had travelled over 7 hours!).

After registration and a late breakfast, we tacked up and got ready to leave. I elected to ride in my dressage tack, both because I am more comfortable in it than in my western saddle, and because it was forecasted to be a hot day and I figured my english tack would be a little cooler for Kachina. Most of the group was riding western but I saw three other English saddles. There were also several people wearing helmets which I always love to see.

Before leaving we had to get a group picture. As you can probably imagine, getting 85 horses and riders arranged in a neat tight line is a difficult undertaking. Kachina was a champ, but it was taking forever and I was worried that I was reaching the end of her patience for standing still. The photographer was up on the hill across the valley to get us all in frame and he finally snapped a few shots. I was super ready to get the ride started, but then they decided to get some drone footage of the group. Yes, take a huge number of horses in a strange environment, put them close to other horses they don't know, have them stand until they are impatient, and then fly a drone over them, that sounds like a great idea! (voice dripping with sarcasm if you didn't catch it). I was getting a little nervous as the drone came towards us but at least they had some sense and ended up keeping it a comfortable distance away and we all lived to tell the tale. Finally it was time to be off!

The ride was organized so that there was a 4 hour loop option and a 1 hour loop option which was really nice for accommodating multiple experience and fitness levels of both horses and riders. I went with the 4 hour group. Our trail had some pretty intense hills early on and I started to worry about how much Kachina was sweating. We had ridden for two hours just a few days before so I knew she was in decent shape, but we don't have hills around our barn so this was certainly more intense. Her respiration was okay though and she seemed to do recover whenever the group stopped for a break or to let slower horses catch up. A breeze also picked up later in the day which helped keep things cooler. 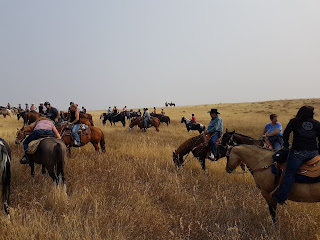 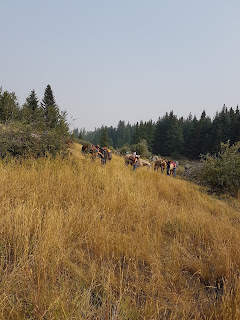 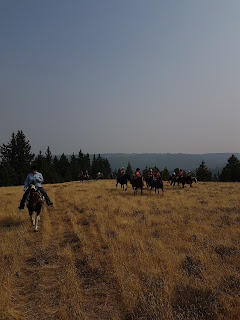 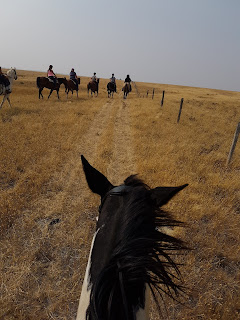 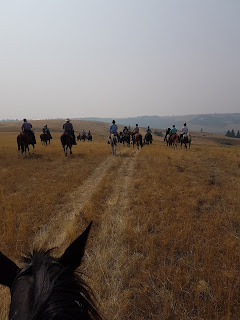 The ride was a little more challenging than I was expecting with the cobblestone sized rocks and steep hills, but Kachina proved to me again what a fantastic horse she is. I have a pet peeve about when people let their horses run up hills and there were several riders like that in the group. Kachina listened to my suggestions about pace, and used her hind end to power up hills at a walk and carefully collected herself on the down slopes, giving a solid lead to horses behind and not getting upset when any horses ahead sped up. There were a few hills steep enough that I was grabbing fistfuls of mane and wishing I had a breastcollar, but my saddle stayed in place and all was fine. The only incident on the trail came when we had to cross a strip of dark water and black sucking mud that was about four feet across. Kachina is usually okay with water, but I know she doesn't like deep mud and she hasn't seen it in a long time because we literally haven't had rain in months. Kachina wanted no part of stepping in that mess. We didn't have a choice though so I wrapped my hand in mane and kept gently encouraging her forwards. Kachina ended up doing a flying leap from a standstill and we cleared the whole thing. I was unseated a bit but thanks to my fistful of mane I stayed with her and we continued on like nothing happened. While it wasn't the ideal response, I really can't blame her for wanting to avoid that kind of nasty footing. 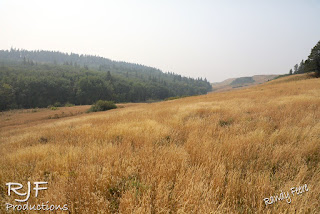 Kachina still seemed to have lots of go in her when we got back to camp, but I knew it was a tough workout for her so I quickly stripped her tack and fetched her water which she ignored in favour of grass. I gave her a good grooming and before long she was looking pretty sleepy. I just chilled out with her for the next couple hours, offering her water periodically. I wanted to give her a good break before the trip home. She eventually took a good drink. I had been prepared to leave at anytime depending on Kachina, but she was super relaxed at the trailer and had her hay bag so I decided to stay for the supper and raffle draws. We were treated to some great food and great music. The event was also a great success on the charity side, raising over $34,000 for the Children's Wish Foundation. 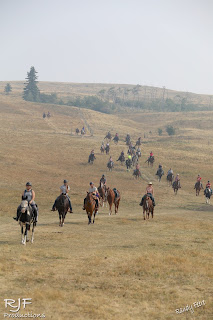 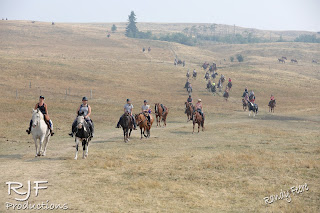 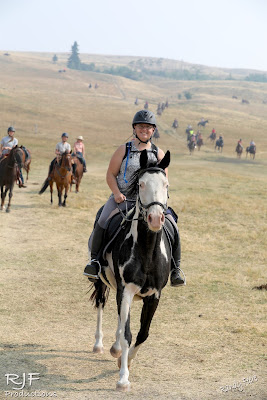 After supper I quickly loaded up and hit the road. We were able to get back to the main highway before the sun set which was perfect timing. Overall it was a great day and I look forward to participating again next year!
Posted by AutonomousDressage