Clearly I am woefully behind in blogging, so thanks to Eventing Saddlebred Style and Confessions of a Dressage Barbie for a nice easy blog hop to get back into the swing of things!

My set up is a 2000 Ford Excursion and a Goertzen 2 horse angle, step up, stock style bumper-pull trailer with a front tack room.

The horse trailer I bought new years ago for what was a way better deal than I realized at the time (many years later I could sell this used for pretty much what I paid for it). Goertzen was a semi-local trailer manufacturer that mostly made flat-bed and utility trailers. They apparently made a brief foray into horse trailers and that's when I got mine. It's solid steel and heavier than the majority of two-horse trailers, but it's also simple and well built. I've never seen another one exactly like it. The Excursion was my parents, it actually still is, but they haven't needed it since they got rid of their camping trailer so I've taken over the maintenance and insurance costs (and my Mom appreciates that it isn't taking up space in front of their house any more).

Things I love:
- Both are fully paid off, and despite their age are in good condition.
- I've had them forever so I know the ins and outs of them in detail (and can also maneuver them like a boss).
- Truck has keypad locks, super useful when at a horse show.
- Huge tack room, I can fit 4 portable panels in there plus hay, water buckets, mounting block, muck bucket, and still have room for my big tack tote.
- Stock windows. The trailer has big open stock style windows. While they aren't ideal for winter hauling, they give great ventilation in summer, it makes the trailer nice and bright so horses like getting in, and I love seeing the tip of Kachina's white nose in my sideview mirror while I'm driving so I know she's okay.
- Generous 2-horse size, haven't met a horse who hasn't fit yet.
- Well made and solid. I don't have to worry about any of the metal components denting or breaking no matter what a horse throws at it.
- Divider. There's a divider between the two horse compartments and after experiencing some failures with spring and pin systems in other trailers, I love how it closes with a simple but foolproof u-bolt. Also, my divider can be pinned fully open as well which gives me a lot of flexibility (like for transporting furniture instead of horses). I was surprised to see how many angle haul trailers don't have this capability.
- Trailer is cheap to maintain. I've had to do some work to the trailer over the years, replacing the jack, rewiring, etc., but the trailer design is so simple that everything has been cheaper than expected to do. Also they put some fantastic bearings on that thing because I've had them inspected a few times and the maintenance guys are always shocked that they are factory originals because they look brand spanking new.
- Excursion has lots of storage, as an SUV with fold down seats, there is lots of room for clothes and tack inside.
- Tack room floor, I like that the tack room floor is rubber mats and that there is no lip on the door, makes it easier to both lift heavy things inside and sweep out hay.

Things I don't love:
- The Excursion is terrible when it comes to fuel consumption. It costs me about $120 for fuel for every 300km I haul (and most of my trips are 300km one-way)
- Trailer is heavy, which really doesn't help the whole gas consumption thing. Also means I will always need a heavy duty hauling vehicle.
- Tack room isn't sealed. Dust and rain can get in through the door, hay and urine can get in from the horse compartment, so all my gear has to be in weatherproof totes.
- Nowhere to sleep. I love the idea of those gooseneck "weekender" trailers. I don't need a bathroom or kitchen but a place to put a mattress would be awesome to save on hotel costs.
- Saddle stands. The saddle stands are not well designed and my saddles always fall off during transit. This basically makes them a waste of space because I have to put my saddles elsewhere. I'd like to replace these eventually.
- Tack room door ices up. The tack room door has tight clearance on the bottom and so when there is any bit of ice outside the door, I cannot open it at all.
- No outside hitching rings. I can tie to the window column, but it's higher than ideal. Also nowhere to tie a water bucket. This is also something I may look at getting installed. 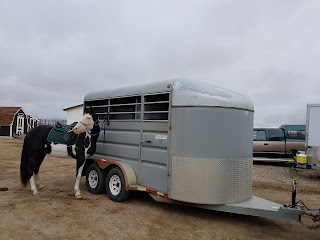 - 100km/h vibrations. Something about the natural harmonics of the truck and trailer means that it shakes a bit at 100km/h. It's done this forever and I've looked into it a few times and nothing is wrong with the vehicle. Everything is fine at 90km/h or 110km/h, but it sucks sometimes when I'm stuck in a line of traffic going 100km/h.
- Excursion suspension. One known con for this model of vehicle is that it has really harsh suspension. I have to slow down a lot for potholes and railway crossings to avoid shaking Kachina and I around too much

Overall I think the love list wins by a long shot. The last time I was at the Mane Event, I was looking around at all the horse trailers that were for sale. Some had some nice features, but in general there wasn't a single one I liked better than my own trailer (and they were all $$$), so I think this one is going to be with me for a long while. I might want to eventually upgrade to a more fuel efficient pickup truck with a truckbed camper, but that's not in the budget anytime soon.

What features of your hauling set up do you love or hate?
Posted by AutonomousDressage