I was quite pleased with how Saturday went, Kachina was chill in her stall, and I felt ready for the next day so I was able to have a nice relaxing evening and night on Saturday. I woke up refreshed Sunday morning ready to tackle Day 2 of the show. 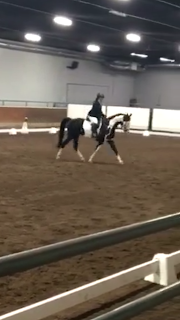 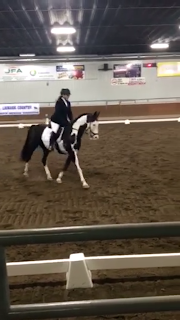 I learned my lesson with the too early warm-up Saturday afternoon, so I brought Kachina for a bit of a hand walk and graze before tacking up. I ended up getting on about 30 minutes before my test. This was shorter than the day before, but still more time than I needed. Kachina immediately was ready to work and gave me some excellent work in all three gaits. I did a run through of my entire test and despite some bobbles where I had to steer around other people, it was pretty solid. She gave me great canter transitions in the practice test so I didn't want to drill the canter anymore. One reoccuring comment from the judge on Day 1 was our need for better upright balance, so I worked on some trot figures focusing on keeping her balanced with proper bend and position. I made sure to keep her moving right up until our test, but I could feel that she was starting to get a bit tense and anticipating. 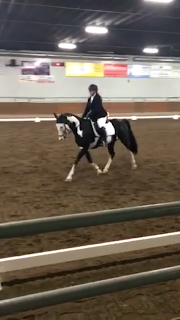 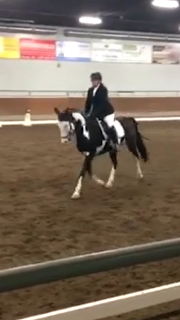 I was really happy with this trot diagonal

We went in for Training Test 2. I felt like I was doing a good job of actively riding through the test and it gave us some nice movements. However we had a few issues: First, she wouldn't stand immobile for our first halt. Just before I asked for my canter transition to the left, a door slammed shut in the building and Kachina threw her head up in the air, I didn't have time to get her back before the transition so her canter started quite hollow and above the bit. Then, in the walk work we felt like we were yoyoing between almost trotting and almost stopping. Finally, she ended up cantering for about 1/4 of our final trot 20m circle. I figured these mistakes would cost a lot of marks so I wasn't optimistic about our score. 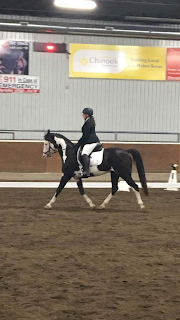 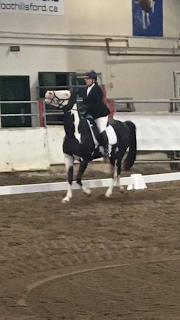 On right is the moment when the door slammed, right before C

KateRose from Peace & Carrots came to watch and had arrived just in time for my test. I didn't see her before my ride but she came and found me in the barn afterwards, her two friendly dogs in tow. We chatted about the test and she showed me some video clips she had taken of it. I was interested to see and hear that the test didn't look as bad as it felt. The judge must have agreed. 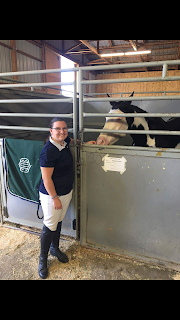 I was really happy to have received another 63+% score. I think the judge was particularly kind to give me a 5.0 and a comment of "lost trot rhythm" for our circle that was 1/4 cantering. When I turned the test over I was pleasantly surprised to find that Kachina had earned a 7.5 for gaits! 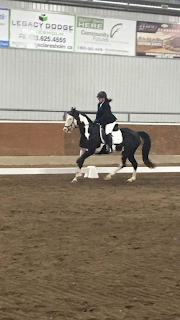 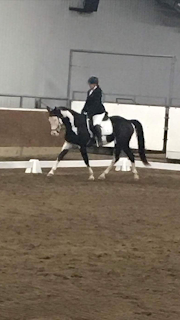 I have to admit, her gaits aren't too shabby

KateRose stuck around for a bit to chat until she had to go meet a friend for lunch. I was glad to see her again, meet her dogs, and for her to meet Kachina. I should have taken photos but I totally spaced. I need to meet her horses next time!

After lunch it was time for me to tack up again for my next test. This test was for the Dressage Equitation division, it's still just the standard Training Level Test 1, just scored for a different division. I shortened my warm-up time yet again to just 20 minutes. This time I chose to not canter to avoid anticipation and just do lots of walk and trot. 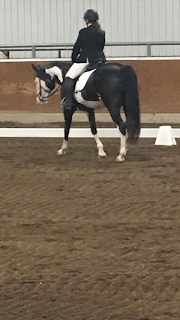 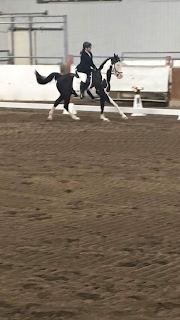 Free walk on left
The first stride of our canter transition on right
(still hollowing, but much better than it used to be)

In the test itself I really focused on controlling Kachina's position and balance. Unfortunately the more frequent corrections came at the expense of some rhythm and relaxation. I aimed to make a change though and I succeeded at making a change. Our canter transitions were passable, but Kachina's sensitivity was winning again and so I wasn't able to really aid for the canter, more just think about it and let it happen. This is going to be a fine balance that I think we'll struggle with for quite some time. I was proud of Kachina again for the test. I'm nitpicking little things but really Kachina was super rideable all weekend and I was happy with her every minute.

When the tests were scored, they combined the marks from both days and determined the Dressage Equitation Division champions. I was the only AA rider in the division so my ribbon was basically by default, but it's a super pretty ribbon, and I did earn it with scores above 60% so I'll take it!


Between my last two tests I had an appointment with a saddle fitter. I've been trying to schedule an assessment with her for quite a while, but my location makes things tricky. It worked out really well to schedule her to look at my horse during the show because she was able to book a few other appointments at the same time and it greatly saved on travel costs. I had my old and current saddles, two half pads, and my entire stack of girths on hand, hoping that something would be deemed acceptable. I thought my saddle was good but I had prepared myself to hear otherwise. Turns out that my saddle is a great fit, that doesn't need any flocking adjustments at all, and the girth and half pad I had already been using work perfectly with it. The peace of mind I get from an expert opinion was well worth the money for the assessment and I'm super stoked that I don't need to spend any more money of changing or replacing things. Yay! 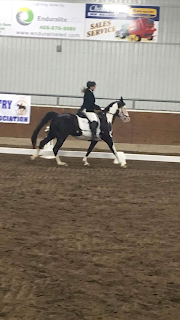 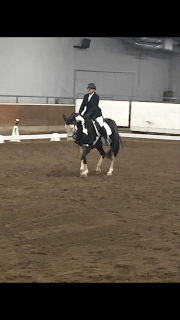 Since I was happy with my first two tests of the day, I had been debating scratching from my last class, just because I didn't think Kachina or I had anything left to prove. The saddle fit appointment ended up ending pretty soon before my test, and I hadn't had a chance to go to the office to tell them I was scratching. I finally decided that it would almost be quicker and easier to just go ride instead of scratching. I did a whole 5 minutes of warm-up for my last test. That's all I had time for, but it was also all Kachina needed, which was amazing to me.

In the test I just had a few simple goals, like to get two good halts, and to push her out into a slightly longer rein. I felt like I succeeded at these goals and it felt like a good test to me. I was actually a bit disappointed when I got the results back as I thought it was one of my best tests. Really though, 61% isn't a bad mark. We did get 7.0s on both halts, and it was the lower coefficient marks that brought us down a bit. 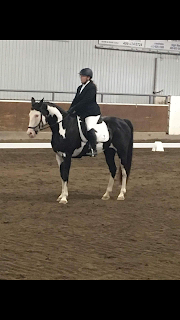 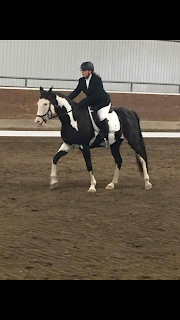 Overall, our scores were good enough to snag AA Training Level Reserve Champion, we had met our stretch goal! The blue ribbon (2nd place in Canada), means more to me than the red one because that one wasn't a shoe-in! We finally felt at home at the level and our scores were 5% higher on average compared to this show in 2016. I was also really proud of the fact that I scored 6.5s across the board for rider position at this show. The ribbons and scores were the icing on the cake, but even without them I was so proud of how well Kachina went for me and how much we have both improved from last year.