First, I invite you to review how this same show went last year (here and here), all weekend I was blown away by how much progress Kachina and I had made since last year and how much more smoothly everything went this time around.


I didn't work on Friday so I was able to spend the morning getting all my stuff together and making food for the weekend, as well as doing a couple errands. I got to the barn around 1pm, hooked up the trailer, packed hay and tack, bathed Kachina, and loaded up. I was so happy to be able to give Kachina a good shampooing. This was her first bath of the year and so it was really nice to be able to get all the winter crud off. Kachina was less impressed. I imagine the ice cold water doesn't feel amazing, but at least it was a reasonably warm day and there was a strong wind so she dried off in record time. There were a few shows last year where I didn't have time to bathe so that made me appreciate my soft and shiny horse this time around so much more.


The haul to the show grounds was thankfully uneventful. I pulled into the show grounds at around 6:45pm. I had been hoping to go for a ride in the ring where the competition would be held, but unfortunately when I checked in I learned that they had closed the ring at 6:30pm (little annoyed that that information hadn't been posted beforehand). It ended up kind of working out though because the braider that I had hired showed up early. I thought Kachina might want to kill me after being bathed, stuck in a trailer for 3.5 hours, and then having to go almost straight into standing still yet again for braiding. Kachina was surprisingly chill though, the braider commented multiple times on what a good girl she was being throughout the process. I showed up with Kachina's mane clean but otherwise pretty wild, and the braider trimmed it up for me first before making really neat braids that stayed in excellently all weekend. It was nice for me that I didn't have to worry about doing any mane prep or braiding myself.  I don't know if I will use a professional braider in the future but I had zero regrets about going that route this time. I didn't end up riding Friday, but I did lead her around and lunge her in the warm-up a little bit.

I was stabled with a friendly group of people from the Chinook Country club. It makes a show so much nicer when you have people to chat with and cheer each other on. I was especially inspired by the lady I was sharing a tack stall with. She is 70 years old, her horse is 22, and they put in two really solid Prix St. George tests!

I planned for a nice long warm-up before my first test so I could work on the relaxation, do some canter work, and then have time to get her re-relaxed if needed. This worked well, because the first time I asked for canter she flew sideways to the outside of the arena. She did the same thing the second time as well. This is a new issue so I was concerned. Thankfully the fix was pretty easy, I think she was feeling a bit too blocked, so I closed the outside rein but left the inside door a bit open for her during the transition, this did the trick and I got a few excellent canter transitions in the warm-up ring.

We went into the indoor arena for our first test Training Level Test 1. I usually find the first test at a show is a bit of a throwaway for Kachina and I, it always takes us a little to find our groove. However this time, we went right in and put in a good test. It wasn't perfect, it was wiggly in spots, but it was generally good. We also got correct leads both directions and had our best ever canter transitions in front of a judge (which doesn't mean they were great, but not the usual llama impression). In fact one of our biggest mistakes was breaking from canter to trot for a few strides before picking it up again. The fact that Kachina was calm enough to break, and then do another good canter transition to get back into it was a success in my books so I wasn't upset about it.

Since Kachina was doing so well, I didn't drill anything more before my next class, we mostly just walked around and stood to watch a couple other tests.

Next came the Dressage Equitation Flat Class. The flat class has everyone ride together, going around the arena rail and following the commands of the judge. Then the score from the flat class gets added to your test score on Sunday for the overall results. The flat class just included myself and two juniors. As well as walk, trot, and canter around the outside, we also had demonstrate sitting trot, free walk across the diagonal, and a halt with immobility. Kachina put in some really good work during the flat class, but she also spooked hard at the end of free walk, went back to llama mode for both canter transitions (partly because I couldn't set her up nicely in a corner or circle), and got a little fast in the later trot work. Still, doing rail work with other horses isn't common for us and Kachina kept things together so I was happy with how it went. I came out of the class, got her to give me two nice relaxed trot circles in warm-up and then dismounted and brought her back to the barn.


I went to pick up my tests and found that I got the following results: 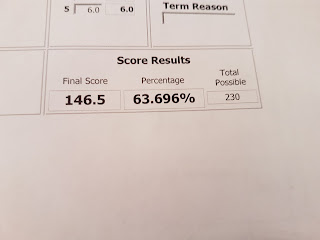 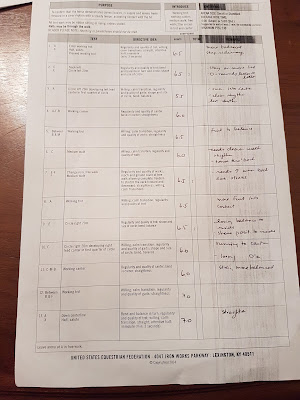 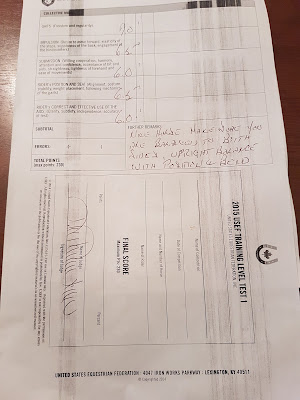 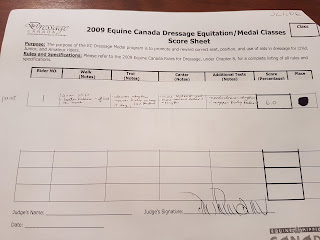 I was thrilled with my score for T1! I had accomplished all of my goals for the show in just the first test (getting good canter transitions and putting in a test that made me feel like we belonged at the level). The placing was also a nice surprise. For some reason I thought that this show had JR/AA/Open riders all lumped together (which would have put me 6th/11), but they actually were split out. I decided then that I would be happy with the show no matter what but I would make myself a new stretch goal of getting Reserve Champion at Training Level.

After a nice long break I tacked up to warm up again for my afternoon test. The warm-up went great, I was able to get relaxation quickly and I even did a full run through of the test in the warm-up area which went really well. Unfortunately, I had given myself too much time to warm-up, so I ended up just standing around on Kachina for longer than ideal. This time when we went into our test it was a lot more tense and racing. We still did all the right things in the right places at least though. 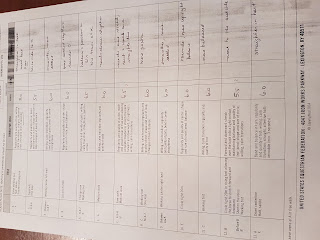 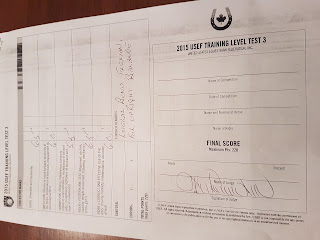 I wasn't too disappointed when I saw my score because it felt like a high 50s kind of test (I had actually told myself 57-58% when I did my last salute). I'm okay with low marks when I know that we can do better, and I was really happy with the work she put in during warm-up.