This past weekend was the first dressage show in my community. I was the sole organizer of the show and it has kind of completely taken over my life for the last month, but it actually went extremely well and I'm glad I did it. It was a small show, but it was a great starting point. My goal was to promote and grow dressage in the area and I think I succeeded.

Some highlights from the weekend:

- The judge was awesome. Her scores and comments were fair, she told hard truths when she had to, but in an encouraging way. She was very open to talking to the competitors and everyone really appreciated her feedback. She was also just a lovely person and I enjoyed hosting her for the weekend.
- The local news station came to the show on Saturday and published an article and video on the show. I hate talking on camera, but the article was good and I think it will let people know about dressage in the area.
- Between the news article and some posts from competitors, there was a positive buzz on social media and several new people joined our local dressage Facebook group (we're up to 55 members now!!).
- May Long Weekend in Alberta can be a total crapshoot for weather (it snows every few years), but this year was about perfect conditions, with an average temperature of 22C and a mix of sun and clouds.


- I had several volunteers help me out over the weekend and they were awesome. One of my scribes has an 8 year old daughter who helped me all Saturday in the office and she was actually a massive help, writing out all the competitor information on the tests (I didn't have stickers), and helping me with scoring and recording results.
- Most of the competitors had positive things to say about the show, and one person even told me that it was the best organized show she had ever been to! 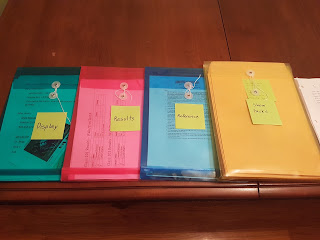 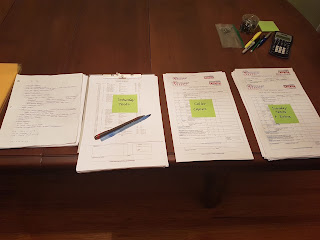 - A couple local dressage riders rode in the show as their first ever competition or their first show in decades. That made me really happy as I wanted to encourage all local riders, not just the ones who already show.
- We had a few non-local entries too, with two people even coming all the way from Calgary.
- Despite being a small event, we had all of the trappings of a "real" show with sponsors, ribbons, prizes, food truck, show photographer, etc.

- A few people who didn't ride in the show came out to volunteer or watch and said they want to enter next year.
- I ran the show with the goal of promoting dressage, not making money, but in the end I came out ahead by about $92 (preliminary numbers, still need to finalize a few costs).
- I survived! I was absolutely wired the whole weekend and was running on very little sleep and with the brain hamsters running on overdrive, but everything important got done and I even enjoyed myself at times! I am friends with several of the riders and it was awesome to see them do well with their horses.


Based on the success of this show, I am planning to make it an annual event, so I'll do it all again next year!

Is anyone interested in me doing a series of How To posts about show organizing? I don't claim to be an expert, but I did do it and I'm happy to share some of the things I learned if people are interested. Let me know!

I also have several posts to write about Kachina, I should have more time for blogging now that the show is over but it still might take me a couple weeks to catch up. I look forward to catching up with reading all of your blogs too :-)
Posted by AutonomousDressage