I'm behind on my posting again, but last weekend (April 22) I went to The Mane Event in Red Deer. I didn't actually go for the weekend, just for half a day, because I also had to squeeze in a trip to Edmonton for some family stuff.

Mane Event is a giant horse expo. It started in Chilliwack BC, then expanded to Red Deer and now is also in London, ON, and Scottsdale, AZ. The Red Deer one is the biggest and it is massive. I tried to see if I could get photos showing the scale, but it takes up 3 massive halls, and all the booths and displays go higher than my head so you can really only see one row at a time. There is a full schedule of events all weekend that take place in two indoor arenas, a round pen, and a lecture area. Then there is the tradeshow. The Mane Event covers every horse discipline imaginable and it's really cool to have so many clubs, associations, and tack stores in one place.

Mane Event is what you choose to make it, here's how I spent my time there:

Since a lot of people come to Mane Event anyways, the Alberta Dressage Association decided to hold their annual general meeting upstairs at the facility on Saturday afternoon. I haven't been to the AGM in previous years but I had a special interest in going this year to a) match faces to the names that I have been communicating with related to the show and clinics I have been organizing; and b) be there in case there were any questions when they voted to approve the new rule that created my directorship position. It was really great to meet everyone and hear what all the area groups have been up to. I am glad that I am a formal part of this organization because it is a great group of people who are doing a lot to try and encourage the sport of dressage.

Shannon Dueck was the dressage clinician at the Mane Event this year. Unfortunately I could only catch one of her presentations but I really enjoyed it. It was titled "From Leg Yields to Pirouettes - How Lateral Work Progresses". She had 3 demo riders of various levels (1st, 3rd, and I1) and she went through lateral work from leg yield -> shoulder-in -> haunches-in -> renvers -> half-pass -> pirouettes. All of what she said echoed things I have heard or read before, but I've never seen it all put together like that and it made it all fit and seem not so complicated. It was a very well prepared and well presented demo. 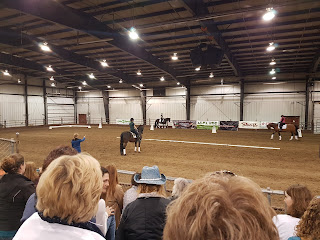 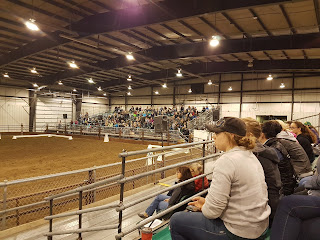 There were at least six different trailer sales places set up with several of their newest and best horse trailers to show off. There was everything from small two-horse rigs to massive 4 horse LQ 5th wheels. It was fun to look at all the features. I wasn't seriously shopping, but I have debated upgrading my trailer to one with a sealed tack room so I was giving it some consideration. Instead of making me want a new trailer though, looking at all the options made me really appreciate the trailer I have. My tack room is exposed to the elements with open stock windows, but it is larger than a lot of other two horse trailers, and the fact that my door doesn't have a lip with weatherstripping makes it a lot easier to load and unload hay and tack bins etc. The latch on my dividers is simple, but it's simple in a way that I don't worry about it failing. Some of the fancy spring loaded contraptions on the other trailers might not stand the test of time as well. I like that my trailer is bright and airy and has no rear tack, some of the new trailers I looked at were a lot darker and seem like they would be tougher to get a reluctant horse to load into. A living quarters would be nice, but it also makes for a much bigger trailer that would be tougher to maneuver, and I have an SUV not a truck and they were all 5th wheels. Just style-wise, I didn't see anything that I liked better than my own trailer overall. And then there was price.... even the most basic trailers on sale were around $20,000. I bought mine for $4000. I think I'll keep it! Looking at trailers did give me a few ideas of how I should maybe modify my tack room to give me better storage though. 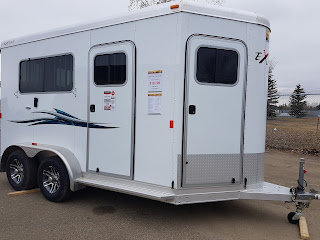 There were several horse feed companies at Mane Event. I took the opportunity to ask several for feed suggestions for Kachina. Perhaps unsurprisingly, I got some very different answers. It did give me some information to look into though.

There wasn't anything I really needed so I wasn't planning on buying much, but I knew I'd probably find something. I actually mostly succeeded at saving my money and I'm happy with the three things I did decide to splurge on:

1. Cell phone thigh holder. In the winter I keep my phone in my coat pocket at the barn. Lately I've switched to a vest to still have a pocket, but even that will be too warm in a few months. I frequently ride alone so I think it's important to have my phone on me, but I struggle with what to do in the summer when wearing breeches (I haven't yet found a belt clip that is comfortable. This seemed like the perfect solution. The strap is made from soft neoprene so it shouldn't mark my saddle, and my phone slides easily in and out. When it's related to safety, the cost is pretty justifiable. 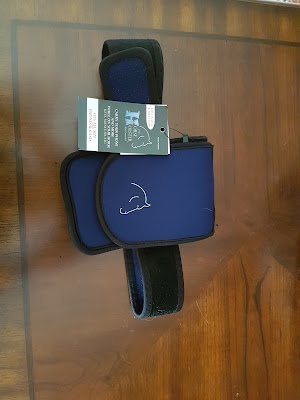 2. Sports bra. You don't need a photo of that. There was one whole booth of just sports bras. I am kind of a weird size so don't usually have much luck in finding one that works, but these girls had a great selection

3. Ceramic plate. This small company out of the Crowsnest pass consists of a husband and wife team that make and sell some beautiful handmade pottery and jewelry. They always bring a selection of horse themed pieces to the Mane Event. Two years ago I bought a plate from her that to me is the perfect depiction of collection and extension. I have it displayed in my house and I love looking at it. This year she had another dressage themed plate that I decided to buy. I can see my collection of pieces from her growing over the years.

I left Mane Event at 8pm so I knew I wasn't going to be home until midnight at the earliest. About halfway though my drive I pulled over to help a lady who's car was smoking badly. As soon as I stopped, flames started being visible and so I made the call to 911 to get the fire department. While we were waiting, the fire grew quickly. Nobody was hurt which is the important thing, but it was pretty crazy, I've never seen a car just go up in flames like that. I ended up standing outside in the ditch in sleet and rain for about half an hour while we waited for the fire department, kept other onlookers a safe distance back, and gave my statement to the police.