I had a super interesting ground work session with Kachina on Friday. It was a blustery day and Kachina was very up while I was grooming her, so I brought her into the round pen to get her focused. I unclipped her lead rope to work with her at liberty. She started following me around the round pen, but when we got to an area with standing water, she tried to cut me off to stay on the narrow dry path beside the fence. I immediately gave her crap for pushing through my space and forced her to move over. This happened a few times. My corrections did have the intended result of making Kachina respect my space and stop rushing ahead. I noticed something else though: the more times I pushed her off, the more interested she was in following me. This was interesting for a couple reasons. First, Kachina isn't the most people-orientated person. She will generally follow a little bit when she is loose, but then move away in her own direction. Second, Kachina is not the most confident horse. With other things, I've found my best success with Kachina has come from breaking things down into easily understandable steps and using lots of positive reinforcement (praise, treats). On Friday I was using more pressure and less reward, but instead of making her lose confidence and back off from interacting with me (which I expected), it was doing the opposite.


Kachina's reaction confused me initially, but I soon realized that it was probably because I was behaving like a boss mare. Kachina lives in a pen with another mare, Koanga. The two of them get along well, but Koanga is undoubtedly the boss. Me and Koanga's owner frequently will watch the two of them interact, and see Koanga use her neck posture and pinned ears to push Kachina off a specific part of the hay bale or make her move from one part of the pen to another. Kachina responds immediately to these directions with zero argument, and the next minute they'll be back standing beside each other, no hard feelings. As soon as I thought about it, I could see that this parallelled what I was doing with Kachina at that moment.


I tried to channel my inner boss mare more. I found that if I tried to walk with a confident boss mare swagger, Kachina was less likely to crowd my space or get ahead of me in the first place. I also started asking for Kachina to move in different ways at random. Boss mares don't necessarily have discernible reasons for their demands, and they don't worry about doing things in a repeated or sensible order, so I shouldn't stress about those things either. I told Kachina to move her shoulder to the right, then her hip to the left, then follow me, then stop, etc. In between my demands though I would take all the pressure off and just let Kachina chill. Kachina responded really well. She listened to me, and when I took the pressure off she was happy to stand or walk behind me in a relaxed manner with her head down and lots of licking and chewing.


Around this time, I saw another boarder had arrived. It was a decent time for a break so I left Kachina loose in the round pen and started walking away to go talk to him. I had only gotten about 40' when I heard a noise behind me and turned around to see Kachina doing her best giraffe impression and running around the round pen. I stood there for a minute watching her while Kachina alternated running, bucking, and tossing her head over the fence to look for me, her buddies, anyone. 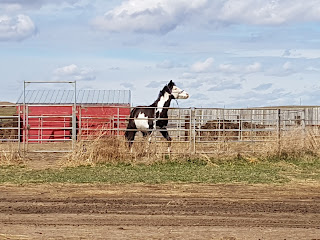 I wondered whether something other than my leaving had gotten her so worked up so I walked back into the round pen and started another round of boss mare behavior, pushing Kachina off and then releasing the pressure and having her follow me. In less than a minute, Kachina was back to her relaxed state.

I went to leave again, partly to check if the last time had been an anomaly, partly because I still wanted to ask the other boarder something. As soon as I left she again hollowed and started running around in a tense way. This time I kept going and started talking to the other boarder, but turned so that I could keep an eye on what my horse was up to in the round pen. She did a fair bit of running, and only stopped to shove her head over the fence to look at the cows or other horses. I even saw her back feet go 10 feet in the air a couple times, which is unusual for Kachina. I wanted to see if she would calm down after a few minutes. She slowed down a little, but she never fully settled. After my conversation I went back to work with her again, and once more she was licking and chewing within moments of my return. 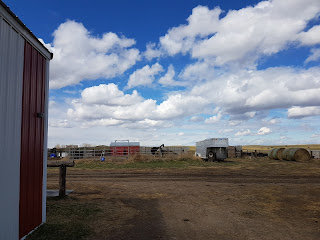 I was amazed at the massive differences in Kachina's behavior. I leave Kachina tied all the time when I go to grab tack etc. She sometimes starts pawing, but she never freaks out, and she will sometimes be tense and pawing even when I'm with her, so I didn't think it had to do with my presence itself. I think it boils down to leadership. Kachina is a submissive horse and just really wants to have another horse or person to tell her what to do. In certain situations like being tied, she is (mostly) okay with being left alone because she has learned what is expected of her. However, in the round pen, she had too many options of what she could do and it stressed her out that she wasn't being told exactly what to do. By channeling my inner boss mare, I was being a more confident leader than normal in her eyes so she was happy to hand over the leadership reins to me immediately when I was around.


I wanted to test this theory a little further, so I led her down to the outdoor arena. The footing in the round pen isn't great, so I don't go in there much. I use the outdoor arena much more. Sometimes when I don't have time for a ride, I will let Kachina loose in the outdoor arena to stretch her legs. She usually runs up and down the one fenceline a few times before stopping at the gate and whinnying for her friends. This time, I let her loose, but instead of leaving her to her own devices, I continued being boss mare. That meant I worked on having Kachina yield away from me with her shoulders or hips, and I also made my own rules and told Kachina with pressure that she wasn't allowed to eat the grass that was sprouting around the edges of the arena etc. In the bigger space, Kachina wasn't quite as tuned into me. She moved her shoulders really well, but there were times that I tried to move her hindquarters and she didn't seem to understand the question. I think it was mostly a matter of needing to make my body language clearer though. Kachina followed me a fair bit, but she wouldn't follow me once I crossed the line into the "scary" half of the arena. However, despite the bobbles, I felt like my theory was further supported because while I was being boss mare, she didn't run or call out to her friends once. Even when I took the pressure off, she was happy to stand and chill. It was the most relaxed I've seen her at liberty in the outdoor arena. I even took off my coat and flapped it around to do some desensitization work with Kachina and she was far less spooky about it than I would have expected.


I'm a bit disappointed in myself that it took me so long to get to this realization, but I'm really glad that I've unlocked another piece to the puzzle that is Kachina. I don't naturally like to be bossy, so this lead mare role is going to take work on my part. I'm excited to see how I can use this technique to work on some more ground work training challenges though. I just have to keep practicing my boss mare swagger!