Adventures in HJ Land - Part I

As mentioned yesterday, I am taking a few months of hunter/jumper lessons. My first one was this Tuesday.


My horse for the night was Kt's gelding Donny. Donny is 14 years old, he competed successfully in the hunters when he was younger, but some arthritis caused him to retire early into a life of low level lessons.

Grooming and tacking up a horse that is not mine was a weird experience for me. I had to think twice about a few things, like doing up a long girth, putting on front sport boots, picking out feet with shoes. None of it was an issue, but it made me realize how very accustomed I am to Kachina and my own tack set-up.

Sitting in the saddle with jumping height stirrups felt surprisingly natural. I think a big help was that Kt is a similar size to me and she let me use her own $$$ fancy CWD saddle instead of the ancient Stubben that she generally makes lesson students use. The CWD fit me well, and while it is a fairly open seat, so is my own saddle.

What was a big shock to me, was riding a horse that required leg! Donny has some good training and
has the capacity to go forward, but he makes you work for it. In the way typical of lesson horses, he will pretend to be a lazy horse who putzes around on his forehand, unless he is made to do otherwise. I sometimes wish my own horse was a little less hot, but this lesson really showed me how good I have it with Kachina where I don't need to work so hard to maintain forward momentum. I can ride Kachina for an hour with no fatigue, but just a few laps with Donny at the trot started getting me out of breath. I'm not as riding fit as I thought! As well as needing to use leg to keep Donny going, I found it was a lot more work to post when I didn't have that natural impulsion to bring me up out of the saddle.

Donny's canter was also hard to ride. Kt warned me that the saddle made it hard to sit the canter so I might want to be in a light seat. However, Donny's canter is so slow that I found it tough to hover. We only did a couple canter transitions each direction this week. I am hoping to get to do more canter transitions in these H/J lessons though because I know I am bad at having my position fall apart in the transition and Kachina needs me to learn how to be steadier.

We then moved on to trot poles. Kt had me start by posting through them, and then start using my two-point. As we repeated the exercise, she moved the trot poles up into raised trot poles, a small cross rail, and finally up to a 12-18" vertical. Donny knew his job better than I did and stayed steady over the obstacles (though he still needed constant reminders to not slow down). I worked on squeezing before the placing pole, sinking into my heels, keeping my knees away from the saddle, and closing my hip angle.

As soon as the jump became a jump, I automatically started doing a neck release. My center of gravity was too far forward for the first few jumps until I started thinking about sticking my butt towards the cantle, but Kt said she appreciated how I stayed off his mouth and kept my seat off his back.

One thing that I found interesting was Kt's feedback on my leg position. In dressage, I have been told to think about putting my knee against the saddle to help turn my thighs more forward and onto the horse. I've also been drilled about keeping my toes pointed forward, and told that my left leg is better than my right leg. My lesson with Kt was the opposite. She thought I was squeezing too much with my knee, and that my right ankle looked lower and more relaxed while my left ankle was stiff and too forward (she called them my Cinderella leg and my ugly sister leg lol). Clearly this is one area where I will have to be careful to compartmentalize good jumping leg position from good dressage leg position.

All in all it was a good lesson. I was kind of expecting to slowly work up to a small jump by the end of the month, so getting to jump a little in the first lesson was a pleasant surprise. I said as much to Kt afterwards and she said that she thought I had it under control so there was no need to wait. It's nice to know that I remember some of the basics from my years of jumping as a kid (I stopped jumping at around 14). She also assured me that some no-stirrup torture is coming ;-P

In other news, look what my awesome SO got me for our anniversary!... 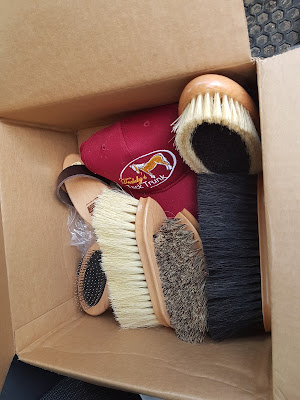 I have been lusting after Leistner brushes for over a year so I'm super happy to finally call them mine! I've only used them once so far, but if you want reviews, check out $900 Facebook Pony and Sprinkler Bandit