This past weekend I had another Dressage Weekend, but this one was with my Kachina!

I'm calling it a mini-clinic, because that's kind of how it was formatted for me, but it wasn't actually a formal clinic. I just arranged with Sandra for me and a friend to haul up for a few lessons.

Both Kachina and KD's pony were excellent about loading and hauling despite the fact that this was their first trip in several months.


The main theme of this lesson was summed up by this quote of Sandra's (as close as I can remember it): "lateral work is the key to unlocking this horse longitudinally".

Kachina was surprisingly chill and relaxed in the new place and we had an easy warm-up.

I have video of this ride. Unfortunately the video does not look near as nice as the ride felt. We worked on so many things, and I never got all of them right at the same time. Even when I take stills from the video, Kachina will look nice in one moment where I look like crap, or vice versa. I'm including some stills showing some of the good, the bad, and the ugly.

We spent a lot of the lesson in a 20m circle, doing 10m circles within the big circle, at each of 4 points around a pylon. The purpose of the little circles wasn't to have them perfectly sized or shaped, but using them to really get Kachina's body on a bend from nose to tail with my legs influencing the position of her rib cage. Then we were to keep that bend and feeling on the large circle until we got to the next small circle.


We did this exercise at both the walk and the trot. The walk work is not bad, but we run into a lot more problems at the trot.

I mentioned before that in my last couple rides I had been introducing shoulder-in and it seemed to be helping hugely with being able to get Kachina to relax, and push up into contact. With Sandra's help, we identified in this lesson that when I influence Kachina laterally, that's when she softens over her back and becomes "through". As Sandra explained, there are two major categories that horses can fall into. For some horses, you must get them forward in front of your leg before you can successfully move onto anything else. For other horses, you have to unlock them laterally before you can do anything else. Kachina falls squarely into the second camp.

Kachina has a tendency to start rushing and increase her tempo while swinging her head up and hollowing her back (giraffing). Instead of pulling back on the reins, we worked on using the small circles and influencing her ribcage to bring her back while keeping soft on the reins.


Kachina will either giraffe, or else stretch her neck down but curl behind the vertical. (She will also tilt her head sideways, but I'll go into that more next post). Neither is obviously ideal. However, Sandra said that when Kachina is curling down with her head, at least she's using her back better than when she's hollow and high-headed. This means that while we still won't be aiming for that position, for now I shouldn't worry about her curling back too much. It's most important to get the body and back working right now and then we can adjust the head position later. This is kind of tough for me as I hate seeing horses going around behind the vertical, but I need to accept that it's not the most important issue and we'll address it in due time. 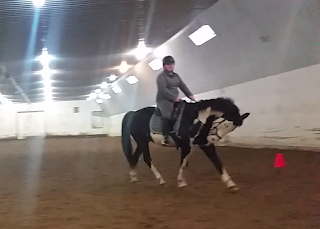 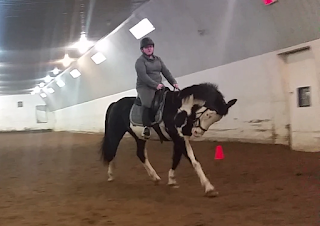 Sandra introduced the idea of the "100% rule". When the horse is where we want them (100%), we need to immediately soften to tell them that's what we want. Softening may likely cause the horse to lose the position. We need to reapply the aid at or before the horse gets down to 75%. If we wait until the horse is down to 50%, then it might take us several circles to get back to 100% instead of just a few strides. Basically this means that we need to immediately reward correct behavior, but then ask again for it relatively quickly if needed so the horse doesn't fall apart too much in between.

Another thing Sandra talked about is how a half halt should only be the length of half a stride. Apparently a big difference between European and North American riders is that we tend to hold on for far too long. In Europe, dressage students are taught from a young age that they only have half a stride to influence the horse's mouth and then they have to get out of there. This is something I need to work on for sure.

We also worked on my leg position. When Kachina starts running, I instinctively take my legs completely off her sides. I need to keep my legs in contact with her all the time, and actually use my legs a lot more than I do. My toes also turn out terribly, I know that already, but we worked on that some more. When I was focused on my legs, I lost my seat, so then I had to think about leaning back and sitting in the saddle.

We did some canter work too. I worked on keeping my upper body quiet during the transitions. Considering that it's only been a few rides since I started teaching Kachina the "proper" canter aid, it's already getting better. We then tried to get that bent around my leg feeling a bit while at the canter. We only achieved this a tiny bit, but we'll get there. Sandra generally agreed that my approach of trying to make the canter "no big deal" for Kachina by not worrying too much about the transitions up or down has been good to this point, but I can now start asking her to stay in the canter for a little longer until I can get a down transition more on my terms.

After canter, we went back to the circle exercise at the trot. Towards the end of the lesson we were starting to get the hang of it and things felt better. Unfortunately though, this was when my camera memory reached capacity so I don't have any media for the end of the ride.