This is only horse related as far as it is one of the reasons that I have been riding and blogging less recently. On November 4th my husband and I adopted a dog from the local SPCA.

Neither of us are "dog people" or "cat people", we are "all animal people". We started with 2 cats because they are easier and suited our apartment life at the time, but the plan was always to get a dog as well as soon as we were in the right situation. The right situation took a while to develop: first we had to get the house + yard (2015), then we had to re-fence the yard (September 2018), then we had to find the right dog. We weren't picky on breed or age but we wanted a medium to large size dog. While both of us have been around dogs, neither of us have owned one before so we knew we simply weren't capable of taking on a young puppy or a dog with serious behavioral issues or very high exercise requirements. We also needed one that would be okay with our cats and potential future children. We wanted to adopt from a rescue rather than a breeder but unfortunately our basic requirements eliminated many of the available dogs.


After a couple months of looking, we found the one:

Aegir is a 5 year old Newfoundland cross. (We don't know what he is crossed with but suspect golden retriever given the shape of his head). He was surrendered by his previous owners and had a torn CCL that required major surgery and rehab, that was complicated by hip arthritis and his massive size (110 lbs). The local SPCA and vet clinic did an amazing job giving him the care he needed before putting him up for adoption. He is recovering from surgery really really well but his rehab is continuing and he will need some management throughout his life. His medical needs were definitely something we had to consider but ultimately we decided that we could provide a better home for a dog with medical issues than behavioral ones and we felt we were up for the task. Despite his physical challenges, he is the sweetest dog. He has a playful side especially outside in the snow, but is also happy to nap beside you for most of the day. He loves his daily walks and exploring with his nose, he would also like to chase all of the deer we see. We joined an obedience class at the local dog club and he is a quick learner. It's also really nice to have an adult dog that doesn't chew and is already well housebroken. We are still getting to know him but he is fitting in great so far and is clearly becoming attached to both of us.

We still have divided dog and cat zones in the house as the cats are a bit intimidated by how big he is, but they are adjusting and we hope they will coexist peacefully in time. (Neither side has shown serious aggression, but Aegir wants to approach the cats and they would rather he kept his distance, we are taking a super cautious approach to make sure nothing goes sideways).


Aegir is the name of a sea giant from Norse mythology. We named him that because all of our animals have mythological names (Apollo, Wendigo, Kachina), and we felt the sea, giant, and Norse connections were all appropriate given his Newfoundland breeding. We don't know if he actually likes water or not so his name might end up being ironic, but there won't be any swimming opportunities for him for at least 6 months (winter in Canada) so we'll have to wait and see. 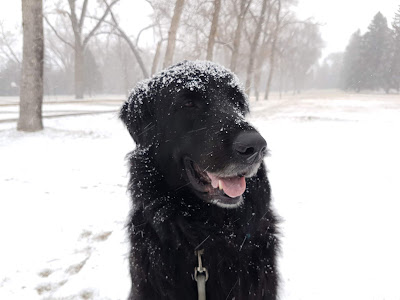 I don't know if he'll be a barn dog yet either, that would be pretty nice but I want to get to know him better and have some solid commands at my disposal before I bring him into that kind of environment. If anyone has any tips for making a good horse-savvy dog please let me know!