I had two lessons with Elaine at the end of August. In the first one we worked on a new concept of controlling each foreleg directly with the corresponding rein. This kept Kachina's tempo in check but also really helped to improve the connection and gave me the best canter I've ever had with her. It was a great lesson!


The next day Elaine changed focus and was getting me to be pickier with the connection. While Kachina was more green to the idea of contact, a roughly correct frame was good enough, but now she wanted me to give bigger corrections when Kachina started nosing out or getting even a little strong in the contact. The general concept made sense to me but the exact method was creating some resistance and I had to ask Elaine several questions to clarify what we were doing and why. Part of the ongoing challenge is that my feel of Kachina's head position does not match reality so I need to reevaluate what the right position feels like. It was a decent lesson but not as great as the day before.


Elaine's September visit ended up being only 2 weeks later. I was out of town on the Saturday (learning to ride sidesaddle!) but I signed up for one lesson on Sunday September 16th. The first half of the lesson was great. We did figures at walk and trot and transitions and Kachina was showing great connection, balance and straightness, Elaine had only a few small suggestions but for the most part Kachina and I were able to show off the work we've been doing over the past couple months.


After some beautiful trot work, I was giving Kachina a walk break and Elaine and I were talking a bit about how things were going. I mentioned that our canter transitions and connection in the canter could still be hit or miss so I wouldn't mind working on those. Elaine suggested that doing a leg yield (but with more inside bend) during the transition was a good way to unlock her back and keep her topline soft. I had expected focus on canter transitions the same way we had tackled trot transitions back in early days, not a whole new approach, but I was willing to try her recommendation. We started by trying a couple transitions from walk to trot and trot to walk while leg yielding. We did the transitions but adding a new dimension actually made Kachina pop her head up more in the transition so it wasn't really giving the benefit it was supposed to. Elaine wanted me to have much more bend and got me to do a bent leg yield on a circle at the walk. I have never been asked to do a "bent leg yield on a circle" so I was confused about what she was looking for but after asking a bunch of questions gave it my best shot. It was kind of like a counterbent renvers I guess, pushing her haunches out to the outside of the circle but bending her neck to the centre of the circle. Elaine than asked us stay in the bent leg yield circle and transition to trot. That's when the lesson really went downhill.


I asked Kachina to trot and instead of trotting she started pacing/doing some weird gaited thing. Kachina is not a gaited horse but this was not a diagonal trot. The second it started I wanted to stop but Elaine encouraged me to push through and ask for more bend and keep going. The pacing continued. I brought Kachina down to a walk to talk to Elaine because rhythm is so key in dressage and it felt like such a mistake to me to do any exercise that compromised the rhythm so badly especially when Kachina normally has a nice trot. She gave me the speech about how sometimes things have to get worse before they get better and I needed to hold the bent leg yield position until Kachina loosened her back and relaxed into it. She assured me the bad rhythm was a temporary thing and that we needed to do this to get to the next level of work. We did a few more circles of bent leg yield at the walk to confirm the positioning and then tried again at trot. More pacing. Elaine kept getting me to push through it and ask for more bend. We did multiple circles and I didn't feel a single step of true trot. Kachina felt like she sometimes switched between 2 beat pacing and 4 beat trotting but it all felt ugly. Elaine kept saying "Good!" when I got a few steps of more bend and 4 beating and I kind of lost it and started yelling that no, none of it was good, she was not trotting! Despite Elaine's direction to continue I eventually just stopped and essentially said that this exercise was not working and I was worried about what it was doing to Kachina's mind and trot. Elaine insisted that this was a good exercise but backed up a bit and allowed that maybe it was too much too soon, maybe I needed to do more work at walk, or do transitions to trot during a straight leg yield first before one with bend. I just really wanted to get some real trot. I went large around the arena and tried trotting without all of the bent leg yield crap and the trot was still broken. Elaine tried making some suggestions but not going to lie, at that point I was super upset that we had broken Kachina's trot and I essentially just tuned her out and rode my horse. Using the reins seemed to magnify the crappiness of the trot rhythm so I tried to forget about connection and tempo and just ride forward and straight until we had a real trot. We got some real trot but also some crappy pacing/gaited stuff. I praised her and started giving her walk breaks on a loose rein after she gave me a few strides of true trot. During one of these walk breaks our lesson officially ended. I apologized to Elaine for getting upset and we tentatively talked about dates for next month, but I was internally disagreeing with her suggestions to work on the bent leg yield exercise on my own over the next month.


I've had a few rides since the lesson and have focused on forward and straight. I've been able to get some nice trot work but in each ride the crappy pacing has reappeared at least a couple times. That one lesson has negatively impacted our progression and despite me trying to get over it, I'm upset about it. It reminds me of one friend who's horse developed a prolonged rearing problem from one lesson where the trainer put too much pressure on them. I really hope this is not a prolonged problem.


This issue really made me step back and consider to what degree we should trust trainers. We all ride with trainers because they are supposed to know more than us. That means sometimes they will give us unfamiliar exercises or teach us things that don't initially make sense, that's how we learn. Sometimes we do improve by pushing through something that doesn't feel right (i.e. every position fix ever where at first it feels way too extreme until your muscle memory adapts). On the other hand, trainers aren't infallible, and we as riders know our horses the best. To what level should we trust what our trainers are telling us and at what point do we need to listen to ourselves and our horses and go a different route? I don't think there is a simple one-size-fits-all answer. It depends on what level of rider you are, how well you know your trainer, how well your trainer knows you and your horse, how well your horse accepts pressure, etc. Elaine has taught me a number of times and her training has definitely created positive change in both myself and Kachina. I had and still have reason to trust her judgement, but in this instance I wish I would have put a stop to the exercise sooner. I think in the future I am going to use the dressage training pyramid to guide my level of trust. Rhythm and Relaxation/Suppleness are the bottom levels and key to everything else. If what a trainer is asking me to do is ruining the rhythm or relaxation for more than a couple strides then I want to learn a different approach of doing the exercise. It doesn't mean I'm not willing to work with that trainer any more, it just means I'm going to stop and ask for a different way in those instances. (As an aside, I believe a mark of a good teacher (of any subject) is one who has multiple ways to tackle an issue, if a trainer repeatedly can't give me another approach then that is when I would seriously consider not working with them anymore) 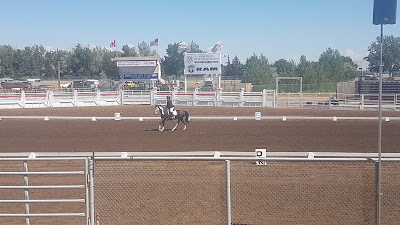 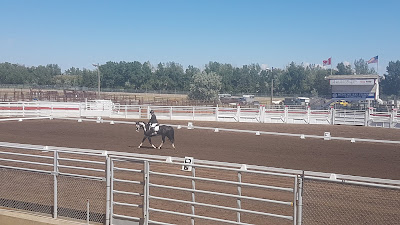 Do you have a line in the sand of where your willingness to follow a trainer ends?
Posted by AutonomousDressage