I am always jealous of all the awesome horse stuff I see on blogs that isn't available (or is super expensive) in Canada. My trip to Ohio seemed to be a great opportunity to do some shopping.

On the first Friday I was in Columbus, I met Tracy for supper at an Italian restaurant near my hotel. We had a great couple hours of non-stop pony talk. Near the end of the evening, Tracy invited me to join her and a couple of her barnmates at a big tack store sale the following afternoon. The sale was at Equus Now, a store that I had found online and was planning to check out myself anyways, so a sale and some company just made it even better!

On Saturday, I first went for my saddle seat lesson. After that was over, I had a little time to kill so I wandered around the campus of Denison University in Granville Ohio. The campus is on a big hill near the center of town (I feel like walking up the hill to get to class every day must make all the students really fit!). I work in the STEM (Science/Technology/Engineering/Math) fields myself so I felt a little like a spy walking around a Liberal Arts College, but it made for a nice walk. 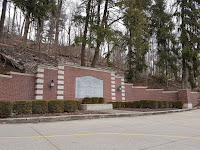 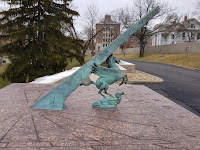 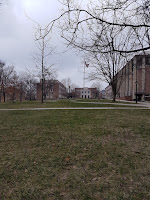 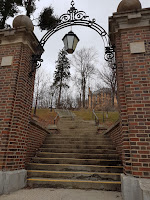 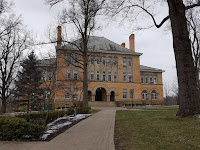 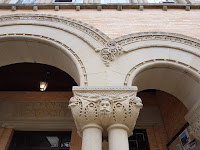 After that, I drove back into Columbus to meet Tracy and her friends at Equus Now. The store is massive, and it was fairly crowded because of the sale. I would be in serious trouble if I had a tack store that nice in close proximity to me! (Except they had a bunch of Ogilvy pads that were really overpriced IMO, it's way cheaper to buy straight from Ogilvy's website even with shipping, and then you also get to fully customize your colours!)

I spent ages looking at stuff, but ended up being fairly restrained in my purchases. I ended up spending only $101 for all of the following: 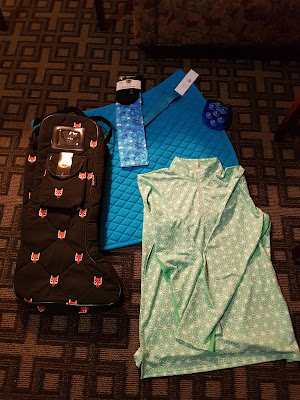 I think I did pretty well!

I probably should have stopped there when it came to shopping, but I didn't. I blame the bad influence of blogland. See I was reading through some blogs on Sunday, and saw Karen of Bakersfield Dressage's post about her new Ovation breeches. I went on the Riding Warehouse website and realized that I could get $5 two-day shipping and get a Riding Warehouse order sent to my hotel before I left (you Americans are so lucky with your shipping rates and speed!). Once I realized that, I kind of wanted to buy everything, but I did have to limit myself both for financial and luggage room reasons. 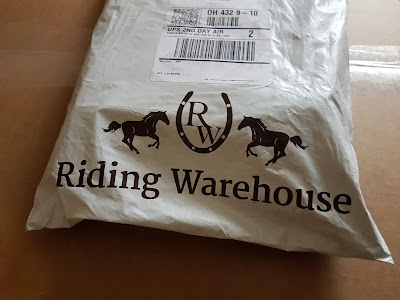 Here's what I bought from Riding Warehouse:

I travelled down to Ohio with no carry-on luggage, so I ended up using my new boot bag as a carry on bag on the way home to fit my boots and a few other things that wouldn't fit in my checked suitcase. This ended up working out awesomely because I had a few hours to kill in Toronto airport between flights and I made a stop at the shoe shine guy. He cleaned and polished my riding boots way better than I could ever do myself and was also a friendly guy to chat with. I would highly recommend doing the same if you ever end up travelling through an airport with your riding boots! (though apparently the TSA guys think it looks a little suspicious on the X-ray if you have a bag with boots and a loaf of bread inside the boots haha (I found some really good gluten-free bread in Ohio and wanted to bring some home))