(These posts are a bit delayed, so in case you missed it, I was in Ohio for work from Jan 21-Feb 4. Most of my trip was work related but I got to meet the one and only Tracy from Fly On Over and squeeze in a few fun horsey activities which will be the subject of these 3 parts)


When I found out that I was going down to Ohio for work for two weeks, I quickly started looking into riding opportunities for while I was down there. Originally I was hoping to find a high level dressage trainer with an available schoolmaster to take lessons on (which I did eventually arrange but unfortunately the trainer's schedule changed and she ended up being in Florida so she had to cancel).


I googled stables in the area and started reading through each website to see if they had lessons, and what discipline. I came across a saddle seat barn and was immediately intrigued. Saddle seat doesn't really exist in Alberta. I had never even seen a saddle seat saddle. To be honest, I've essentially only heard negative things about the sport. However, I didn't want to make false assumptions so I figured I would give it a try and judge it with my own eyes. 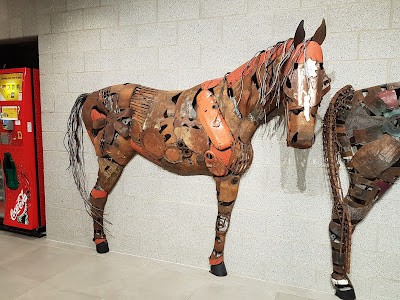 The saddle seat barn had a very easy online booking feature on their website. It asked about my riding history so I checked the boxes for hunt seat, dressage and western, and said I have ridden for a lot of years but never tried saddle seat before. I booked a lesson for Saturday morning and got a quick confirmation email from the stables.

When Saturday came, I rented my car and drove East out of Columbus to the Granville Ohio area to get to the barn. The facility was very nice, but I didn't have much chance to take photos. I was met at the door by my instructor for the day, J. J is a guy who seemed to be in his early 20s. I think it's his parents who run the program. He started riding western himself but now competes in saddle seat. Him and his parents breed saddlebred horses. J led me to my lesson horse for the day and asked me a bit about my riding background. It was evident that he mostly teaches beginner lessons, so when he heard that I knew the basics, he went to take the rainbow reins off the lesson bridle and grab a different saddle.


Tacking up was interesting. It felt weird for me to not be tacking up myself and mostly just watching J do it. I was pleased to see where the saddle sat on the lesson mare's back. One of the negative things I had heard about saddle seat riding is that it puts the rider on the weak part of the horse's back, on the loins. When I see pictures of saddle seat riders it does look they are sitting really far back. However, the panels of the saddle still lie in the same location that the panels for a dressage or jumping saddle would, between the withers and the last rib. The difference is just in the top of the saddle, where the rider sits. The rider is sitting at the back of the saddle, but thankfully not on the loins.


The second part of the tack that was interesting was the reins. Apparently, in the saddle seat world, if you don't need coloured parts of the rein to know where to keep your hand, the next step up is double reins. Obviously that is very different from dressage where a double bridle doesn't get used until relatively high levels. Also, while I was given double reins, they weren't attached to a double bridle. Both reins were attached to the same ring of a snaffle bit, but the "curb rein" was threaded through a ring on a breast collar thing, which would give it some downwards leverage. I've never seen this type of set up before, but J made it sound commonplace. While I was riding, I had the lower set of reins a bit loose and never tried to engage it.


I had a 30 minute lesson. We just did walk and trot, some transitions and some circles. J focused much more on my equitation than the lesson mare's way of going. I appreciated that, because I wanted to get a feel for what a proper saddle seat position felt like, and I always feel bad getting after lesson horses for little things when I know I won't be riding them again. The mare I was riding was a typical lesson horse. She was quite happy to cruise around the arena at the speed you wanted, but she was a little dead to the aids when I tried to push her more into the corner, etc.


I'm not sure how to organize what I learned during the lesson so I'm just going to do a bunch of bullet points:

The whole experience was over a little too quickly. They are actually in the process of moving stables so the place was pretty quiet. I wish I could have seen some other people riding or experienced a bit more of the feel of the barn, but nothing I could do about that. There's still a whole lot I don't know about the saddle seat world, but what I saw were people who are riders and who care for their horses, it's done in a different saddle but it's not as different as I thought it might be. Overall, it was a fun and enlightening experience and I'm glad I did it!
Posted by AutonomousDressage