The Case of the Carrot Bag

After some early snowfalls, we've had a couple weeks of quite warm weather. I've been trying to squeeze out as many outside rides as possible while I still can.

On Thursday night, I rode out around the fields alone. First we did some hill work and some work on bending at the walk. Kachina was being good, but when I tried to do the same work at the trot, she started to get a bit tense and fast. That meant I was pretty focused on doing different transitions and figures all over the field to get Kachina relaxed and paying attention. We were making good progress, but the light was fading quite quickly. Suddenly, completely out of nowhere, this massive tractor tops a rise in the field and starts heading straight towards us. The tractor wasn't that close, but it had it's massive headlights on, had two huge arms out to either side, and was driving as fast as I've ever seen a tractor go. Add to that the fact that it was making a noise like a plane taking off as it climbed the hill towards us. I just about jumped out of my skin. That particular field was harvested weeks and weeks ago. I've actually seen a herd of antelope living there over the past couple weeks so it didn't seem like much was going on there. I had a good view of the whole field at the beginning of my ride when I had topped the tallest hills and the tractor hadn't been around then. I had no idea what it was doing to the field at night in late October, I still don't. Anyways, I started to trot Kachina out of the path of the tractor, and then the tractor turned and headed away from us. It was hidden from view by the rise for a little bit, but then it started heading towards us again. I couldn't discern what pattern it was taking over the field so I tried to figure out how to avoid it. I didn't think the farmer would intentionally run us over, but he may not be expecting us to be there and it was dark enough that we weren't super visible. Unfortunately, the tractor was directly between me and the barn. I ended up bringing Kachina over to the closest road and riding back home that way, but it was the long way and it was pretty dark by the time I got back to the yard. Kachina was awesome, she got a little tense, but the tractor definitely scared me more than it scared her.


My next outdoor ride was on Sunday. I met my friend S and we headed out to the fields together. We started in the early afternoon so at least we didn't have to worry about running out of light this time. The ride started really well. Kachina was being better at bending her neck instead of twisting her head, and she seemed nice and relaxed.

I reached into my pocket to grab my phone so I could record a time for 2pointober. Unfortunately, my phone was in the same pocket as a bag with a few carrots. The second the bag made the bag rustling sound, Kachina lost her mind. Of course one of my hands was in my pocket as opposed to on the reins, so my control was limited. I managed to turn Kachina but it was more of a fast upwards whirl and I flew off her.

My landing was on dry dirt, and I landed on the side of my leg, which has some extra padding, so I bounced up pretty immediately. It was my least painful fall ever, I didn't hit my head (though I was still wearing a helmet of course), get the air knocked out of me, or even bruise myself. Kachina galloped away as soon as she was free. I was worried that she was going to run all the way home, but thankfully she stopped and let me retrieve her. I gave her some pets once I caught her to let her know there were no hard feelings, I'm sure she was as scared as I was. We were in the middle of a flat section of field and so I wasn't sure how I was going to get back on. S has longer legs and is better at swinging up without a mounting block so she dismounted to give me a leg up. Once I was back on board, I did a few circles and bending exercises to make sure that we had control, and then we carried on with our ride like normal.

Carrying on like normal was a huge success for me. I'm not a rider who falls frequently. In the last 14 years I have only come off a horse 6 times, including yesterday. The last time was when Kachina bucked me off hard while cantering in June 2015, twice in one lesson. I've been lucky in that I've never suffered any serious injuries, but falls for me are usually linked with bucking and result in a huge loss of confidence for me. The last time Kachina threw me, I didn't understand why, and it affected me for months, worrying if she was going to do it again. It was a huge withdrawal from our trust bank and it took a lot of small deposits to build up our balance again. Also, generally after a fall, I want to hang onto the reins for dear life and I stop being able to ride effectively.


This time, my shakiness only lasted a few moments and I was able to give Kachina her head and let her free walk. We rode for probably over an hour after the incident and it was a really great ride. Kachina recovered quickly too and was stretching and blowing. Long before we got back to the barn, it was like the fall never happened (well almost, I did avoid rustling the carrot bag for the rest of the ride). I even was able to record a two-point time eventually. Our trust bank has a healthy balance now and this fall didn't put a dent in it.

Once our ride was over and I had dismounted, I pulled out the carrot bag to show Kachina. I figured that since I was on the ground and she could see it, she'd be fine. I was wrong. She whirled away and I didn't have a good grip on the reins so she ended up running back towards her pen. We ended up doing a few minutes of desensitization to the bag. She ended up accepting carrots while the bag was touching her nose, but she was still giving it serious side eye. Kachina is generally pretty sensible so I am surprised that the sound of a plastic bag was so scary for her, we'll definitely have to work on that some more.


Anyways, moral of the story: carrot bags are clearly horse-eating monsters, while giant roaring tractors are no big deal #horselogic 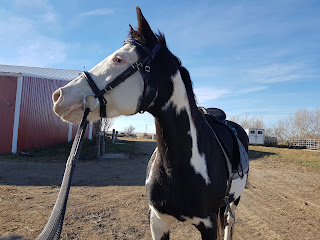