I board at a pretty quiet barn. It's been especially quiet for a lot of 2016. There have been fewer boarders this year and more empty saddle stands in the tack room. Lately though there have been more people around. One person was able to start riding again after a long break due to a shoulder injury, one girl who sold her project horse has started riding a friend's extra horse, someone else came back after a few months in another province, and a new fun boarder joined the crew. All of this meant it was time to do a group trail ride.


Six of us met up on the Friday afternoon before I left on my trip for a ride. We're a diverse group with very different horses and riding backgrounds (the tack included 3 western saddles, 2 aussies, and 1 dressage saddle), but we all enjoyed the opportunity to just go for a low pressure hack together. It was a beautiful September day with blue skies. The ground was dry, and we had our pick of the tractor trail or several harvested crop fields to ride on. 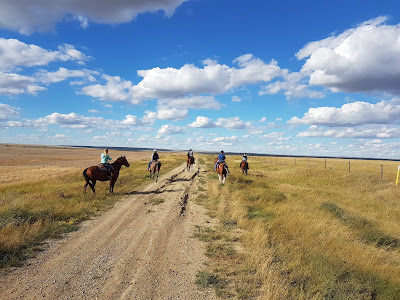 A couple of the horses haven't been ridden out like that before, at least not recently, so there was a bit of tension in places, but overall pretty good. Once again, I was grateful that Kachina is so level headed out in the open and invited two of the riders to stick their horses heads up Kachina's tail if they needed too. They did need to at times, and Kachina didn't blink an eye.


Halfway through the ride, we decided to split into two groups, with one group heading back to the barn early. I will always, always cut a trail ride short if a trail buddy needs it, but since it was going to be my last ride for two weeks, I was glad that our group was big enough that I could keep going without leaving anyone stranded. 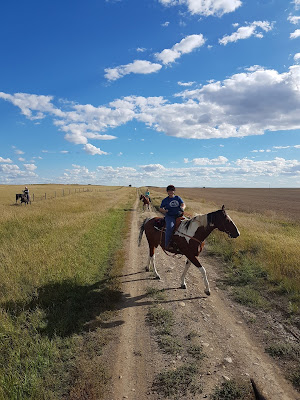 Once the nervous horses and riders were out of sight, I took the opportunity to canter Kachina through the fields! 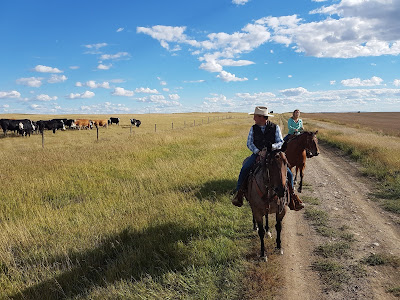 I used what I had learned in the clinic the week before to lock my legs into a steady position and go up into two-point. Kachina was thrilled to canter in the wide open field and picked up a balanced canter without much encouragement. I didn't worry about her lead or head position, and just took the time to enjoy the feel of the sun on my back and the wind in my face. Our (giant) circles were not round, as she tried to drift towards home or follow the furrows in the field, but she was obedient and came easily back to trot each time I asked her. We did three or four big circles in each direction before joining back up with the others. I just wish someone had taken a photo of that! 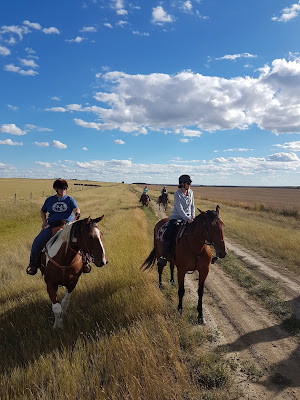 Overall it was the perfect last ride before my trip.

Everyone in the group enjoyed the outing (even those who turned back early), and we hope to do it again a few more times before the weather turns.
Posted by AutonomousDressage