I'm back! I spent the last two weeks on vacation in Ireland and Germany! It was a great trip. My family is in Ireland, I don't get to see them often and I really treasure every time I do. This time had the extra bonus of being the first opportunity for me to introduce my SO to most of my extended family.

It wasn't a horsey vacation, but I did manage to squeeze in a little bit of cool horsey stuff!


Note, the racing my cousin is involved with is all steeplechases and hurdle races, (the jumps in hurdling are smaller than in 'chasing). This is common in Ireland, but is significantly different from the kind of (flat) racing I am used to seeing. We watched a couple races on television, and while the falls are terrifying, it is an impressive and exciting sport to watch.

My cousin currently has a few broodmares, 4 yearlings, and 2 horses in active work (he's just a small mixed farm with some horses as well as cattle). We got to visit them all. He had sold a few two and three year olds just a couple weeks before our trip. He aims to sell many of his youngsters at that age, and only keeps a few to when they start racing. Apparently a lot of people in the UK use Ireland as a place to find young prospects.

First, we visited the yearlings out in the pasture they share with the cattle. There were two geldings and two fillies. Apparently more good races for fillies are starting to appear in Ireland. All four were friendly, rambunctious youngsters. 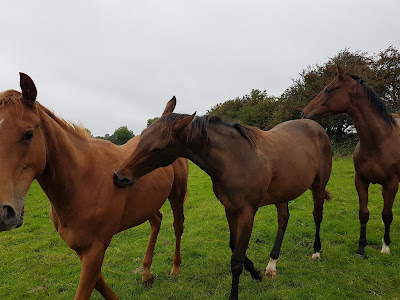 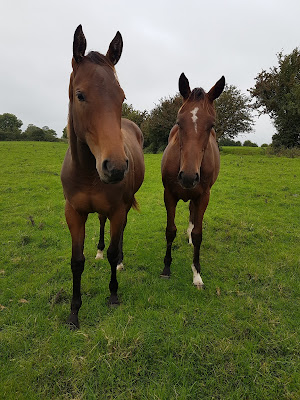 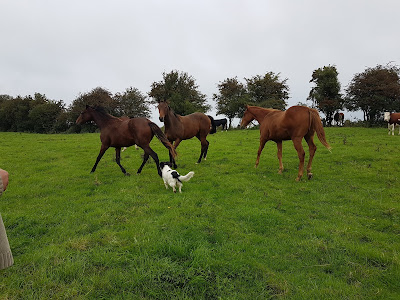 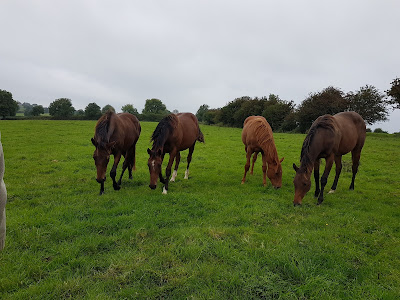 My cousin then took us to visit a couple local training outfits. At the first stop, the guy we went to see wasn't there, but it was cool to see a facility where they train all sorts of horses, from racehorses to pony hunters. We watched part of a jump lesson and it was cool to see that it wasn't too different from what I might see at home.


Next, we went to visit the training facility where my cousin's horse Jed is kept. Jed is a five year old and won 1st place at a hurdles race in early September. As my cousin and uncle said, it takes a lot to get a horse to the winning circle, and it doesn't happen often, so you have to celebrate when it does. They're very happy with Jed and are hoping he goes on to more success in the future. Jed is absolutely racing fit but was a calm gentleman in his stable. I of course had to get a photo with the champion. After I visited Jed, he went on to win another race the week after!


The other horse that my cousin has in work hasn't raced yet, but they are preparing him for his first point to point race. This is a longer race over fields with more jumps. It seems that the point to points kind of work like a jr. league to the hurdles and steeplechases. If a horse does well in a point to point, that says good things about their future potential, and it can also be a good way to sell them. 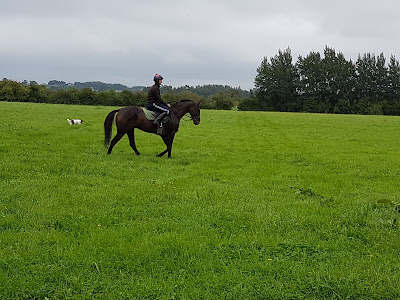 This up and comer horse is a big guy at about 17.1hh. His size meant that he was slower to develop and took more time to get fit. He's now 6 (I think?) and is finally ready to race. He lives at the farm, and a local rider comes in regularly to give him conditioning rides. I got to watch one of his rides which consisted of a short warm-up followed by 6 laps of the front field at a fast canter/slow gallop, three in each direction. He's a beautiful mover and just eats up the ground while making it seem effortless. 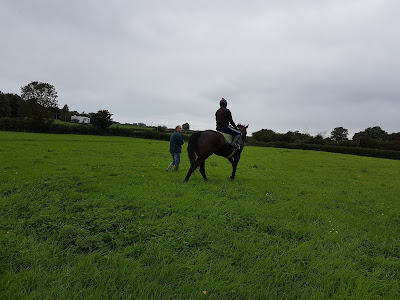 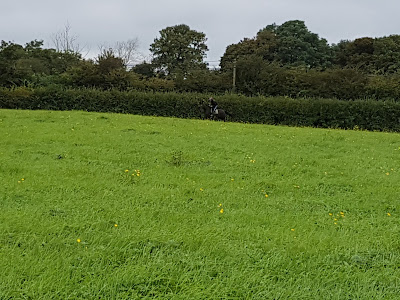 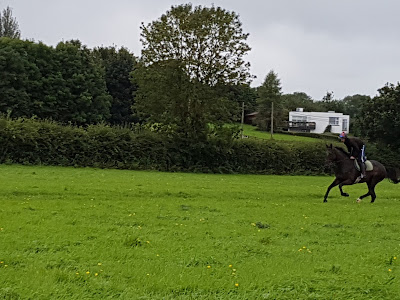 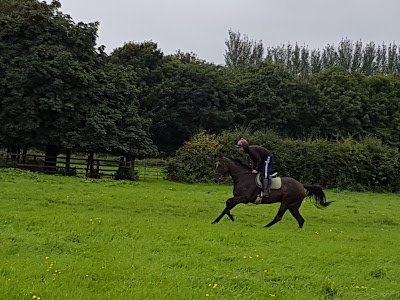 I won't pretend that I know a lot about horse racing in Alberta or North America in general, because I don't. However, several aspects of the Irish racing scene surprised me:

- colts are pretty much all gelded early before racing
- there isn't much focus on races for 3 or 4 year olds, many horses don't race until they are older
- not all horses in training live in stalls, they can also be out on pasture
- training rides take place down country lanes, around grassy fields, and in arenas, as well as on the track
- racing horses are usually just hauled to the track for race day and return home that same night
- jockeys come in more varied shapes and sizes - none of them are fat, but some are surprisingly tall

I follow some bloggers who ride OTTBs and I couldn't help but think how the above must help to produce horses who can better adapt to life after the track. (If you have experience with OTTBs in North America I would love to hear your thoughts!)

It was super cool to get the opportunity to see some of what goes on behind the scenes of horse racing. It certainly makes me want to watch more races!
Posted by AutonomousDressage