The Importance of Pockets

Holy crap guys, I am never riding without pockets ever again!

I am a very big fan of pockets in general, but especially when I am working with horses. I could get started on a giant rant about the complete gender inequality regarding pockets in most clothing, but I'll try to keep focused on the equestrian side for this post.

For the show last weekend, I was riding in a new pair of beige breeches in order to blend into hunter land. I didn't have enough notice to order a pair online so I bought the only pair of beige breeches that fit me in the whole city and had zero choice (it seemed lucky at the time that there was a pair that fit, but maybe I should have just worn my whites instead). Anyways these breeches had only 3 things going for them, that they fit, they were beige, and they were decently priced (bought them used). They were Kerrit's winter breeches which were completely unsuitable for riding in 30 degrees C, they had a super unbreathable full seat, but worst of all, they had no pockets!

Normally I ride in Horze Grand Prix breeches, I have them in white and navy in full-seat, brown and green in knee-patch, as well as a black winter pair. I also have one pair of ROMFH breeches in grey. All have pockets on both sides that are a decent size. I do occasionally ride in sweatpants or leggings that don't have pockets but only when it is cold enough for me to ride in a sweater or vest that has pockets instead. 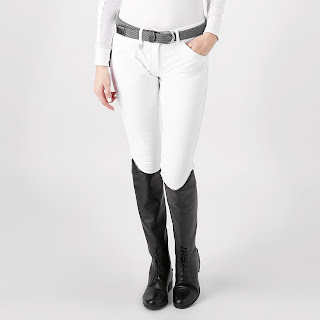 What do I use my pockets for?

Anyways, at the hunter show I did not have pockets. It was a bit of a pain all morning but the worst part was when I was trying to load Naia back in the trailer at the end of the show. For one, I didn't have a place to stash treats and the trailer is still new so I try to give Naia lots of food rewards for being in the trailer. Not having a place for my cell phone also became an issue. Naia was pretty worked up being taken away from the other horses so I felt like I needed both hands free to work with her. After she started barging into or away from me I knew I needed to take a step back so I called my trainer SJ for some advice. While I was talking to her I was just working on having Naia do some ground work near the trailer (backing up, parking, etc) but not asking her to actually load. I put my phone on speakerphone and rested it on the back corner of the trailer so I could hear SJ while using both hands to work with Naia. Well at one point Naia barged past me to get on the trailer, and stepped up with her hoof directly on my phone!!!! My phone does have a case and a screen protector but neither is very heavy duty so I was sure my phone was a goner. I am not sure whether I am just super lucky or whether Samsung phones are really that tough but amazingly my phone doesn't have a single scratch on it! However it was definitely a close call and I am never riding without pockets again!

Do you find pockets as necessary as I do?