I had a quiet start to the year but then went to Ohio where I met up with Tracy and tried saddle seat riding. I only rode Kachina a few times but we finally confirmed our ability to do decent 20m circles at walk and trot that we had been working towards at the end of 2016.

In February, my plan to organize a horse show started coming together and I reflected on all the ways that dressage in my community had evolved to-date. I had 2 lessons with the new resident dressage trainer D (who ended up only being a resident for 6 weeks) and I started canter work again after taking a break for a few months to solidify some walk/trot basics. There was also a clinic with Sandra (which was the 2nd clinic I organized). Finally, through a chance internet encounter I found out some information about Kachina's past and rough start to life. 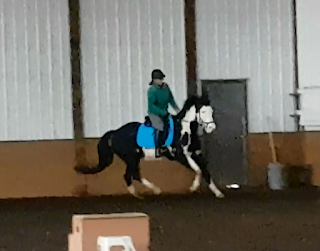 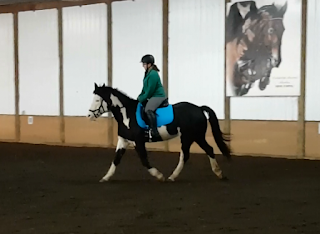 I was out of town for two weeks so didn't do a whole lot on the riding front, and was completely inept when I got back. I did finally figure out a girth for Kachina though (which was quite the saga). 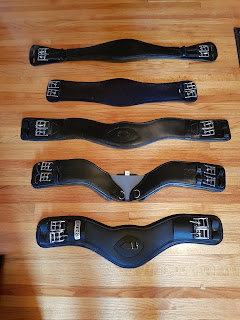 I tried something completely different and started a month of Hunter Jumper lessons with Kt on a lesson horse which was my first time jumping in ~14 years. I had some ground work epiphanies and learned about how much Kachina needs to rely on a leader. We also helped herd cows and I went to the Mane Event.

Busy month! This was my second month of Hunter Jumper lessons, this time with N on Sunrise. I coordinated and rode in another clinic with Sandra, where Kachina had physio for the first time and got upset about it (which hurt both of our confidence and took a month to regain it). The major feature of May was that I almost single-handedly organized and ran the first ever dressage show in my area (which I also rode in myself). It was small but a success.

On the first weekend I scribed at a Gold dressage show and also met KateRose for a simulator lesson. I started Kachina on new feed and magnesium supplement. In the saddle I worked with Kachina to completely change how I asked for canter transitions with mostly good results. I also learned how much weighting my stirrups impacts Kachina and figured out how to use it to help rather than hinder us. We went to the Bronze show where I had my best show to date with Kachina and came home with Champion AA Dressage Equitation and Reserve Champion AA Training Level. At the show I had Kachina's saddle fit assessed and settled on proper girth and half pad. Kachina went out to pasture for the summer at the end of June.

July started with a three-day clinic with Robin Hahn, where we learned that our lateral work is pretty good, but also the first appearance of Kachina's terrible lateral canter, which took months to make go away and also screwed up our canter transitions (not necessarily related to clinic, just coincidental timing). We then had a bad lesson at a clinic with Elaine, which at the time was really frustrating, but ultimately helped me to figure out what I need from a trainer and what I can and must do myself as a rider. I competed in local All-Breed show, where warmup conditions sucked and my dressage tests were disappointing, but all things considered I was happy with Kachina and how far we had come from previous years. This month we had a couple rides where the problem from last year reappeared and Kachina would balk at moving forward and hump her back at the start of a ride when I got on (cause still under question). Kachina also started to get a bit herdbound in her pasture situation. A friend visited and rode Kachina but neither of us were able to get her to relax.

(This is where my blogging went seriously downhill so apologies for descriptions that don't have corresponding posts). I spent quite a bit of time on the ground and in the saddle to get Kachina over her herdbound issues. Media and reflection from July made me realize that a pulling problem had snuck up on me, so I made myself not use reins for a few rides, it worked really well as a reset and helped me internalize what reins are needed for (controlling the shoulder, steering), and what they are not needed for (pulling, half halting). I gave Elaine another chance by signing up for a clinic, this one was a lot better and I cleared up previous misunderstandings and figured out what she was asking from Kachina and I. I also got engaged, but that wasn't horse related.

We continued to work on herboundness, which worked well and included some amazing rides outside in the pasture. I also continued to work on not pulling backwards with the reins and kept working on keeping my body quiet for canter transitions. We had a great time at the Cypress Hill Wish Ride. For our final show of the year we competed at the Lethbridge Wildrose show where I was thrilled with how relaxed both Kachina and I were for our tests, but where we weren't on the bit so we scored a frustrating 59% in all tests. I participated in yet another Elaine clinic at the end of the month. This time our relaxation and tempo had improved enough that we were actually able to work on new things like contact and straightness. 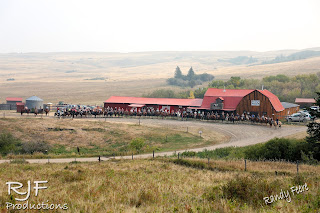 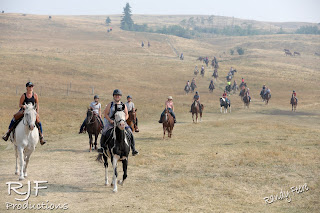 In October the weather turned. The horses came in from the pasture for the winter, except Kachina didn't want to be caught by anyone other than me. The first moisture in months softened Kachina's feet and a trim revealed some hidden deep seated thrush that caused us some issues over the next month (her feet are looking much better now, but I am still rebuilding her trust with having her feet handled from when they were so sensitive). Sandra came down for another clinic. Day 1 was filled with some tension but I learned a few new ground work techniques and in the saddle we worked through things by focusing on keeping Kachina between both reins and both legs with only small changes. Day 2 included physio for both myself (which was really needed for my upper back), and for Kachina (which helped in the short term but made her tighter and more defensive in the weeks to follow - turns out Kachina is not a bodywork fan). Mini-updates here. 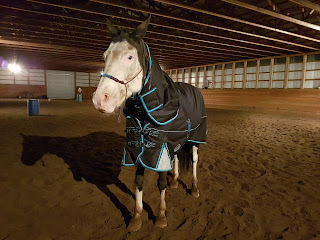 In November I barely rode at all, just worked on lunging and ground work while giving Kachina time to have her feet and body go back to a happy equilibrium. More frequent trims and snow helped with the thrush but Kachina told me in no uncertain terms that spraying her feet with apple cider vinegar was unacceptable, and she got more acrobatic about removing her foot from my hand so we went back to basic lessons on foot etiquette. Kachina was more reactive about being touched in various parts of her body that were the focus of physio in October, I respected the messages she was giving me and didn't push things too much. This is also when work started to get crazier. 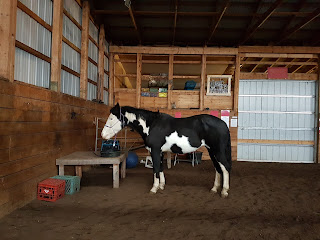 Another quiet month on the horse front as work took up more and more of my time. Early in the month I took Kachina to the vet to rule out any medical reasons for her girthiness and body soreness. We did have Sandra down again for a short one-day clinic where we skipped the horse physio and had a productive lesson where we worked on the same things as the last clinic in October, but this time with more success and less tension. I also discovered more of the extent of Kachina's problem with other people and devised a plan to tackle it. 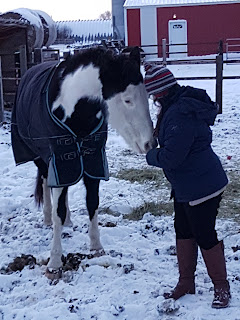 I enjoyed doing this write-up because it reminded me that despite the stagnation of the last few months, we actually accomplished a lot in 2017. I'm excited to see what 2018 will bring!
Posted by AutonomousDressage