On Friday I rode in the outside arena for the first time this year. It took a while after the snow melted for the arena to dry enough to be usable but on Friday the barn owners harrowed it all up and the footing was perfect.

Kachina can be a high energy skittish horse in general, but being outside or being ridden somewhere different doesn't usually affect her much. Some part of me knows that, but there's another sizable portion of my psyche that is convinced that riding outside for the first time in several months will cause issues, and so that can easily become a self-fulfilling prophecy on my sensitive mare.


I had arranged to meet fellow boarder and friend S out at the barn, so after we tacked up we walked down to the outdoor arena together. We both mounted up and started walking around the arena. Kachina was a bit up, but pretty good, however S realized that her mare was a tensed firecracker and she opted to hop down and lead her mare back to the barn to grab a lunge-line (it's a bit of a hike). As soon as Kachina realized that her buddy was leaving, she got pretty upset and I felt like I was riding a firecracker myself. I used my trusty lateral work to get her mind back on me: move her hips, move her ribcage, move her shoulders. It took a few more repetitions than normal, but Kachina listened and eventually focused and relaxed. When S and her mare reappeared at the gate, her only outward response was a flick of her ear.

While we were on our own in the arena for a little bit, that didn't last long. For most of my ride, Kachina and I were sharing the arena with three other horses, two being lunged and one other being ridden. It's a big arena so there was plenty of room for us all, but that's about as busy as our arena ever is.


Kachina was a bit skittish at times, but for the most part I was really impressed with her. We did lots of walking and trotting (I probably could have cantered but I wanted to make sure the first ride out was a good experience for both of us), and rode around the entire arena (including the scary corner), doing various figures and changes of direction. I successfully worked on our lesson from the last clinic and got inside bend with minimal inside rein use, and a more quiet body on my part. 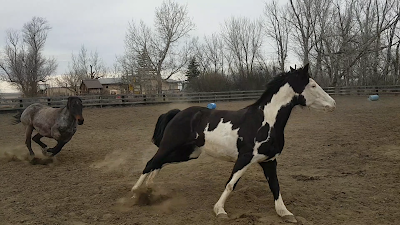 As well as being impressed with Kachina, I was also pretty impressed with myself. I was in a situation where I would normally tense up, but for the most part I kept riding my horse and didn't shoot my lower leg or upper body forward (and made quicker corrections when I did). The best part was, when Kachina got a little stuck behind the leg and contact, I immediately added leg and got her to move forward. I know this is a basic tenet of dressage and really of all good riding, but I have been struggling with this for sooooo long! It has been a serious mental block for me to be able to add leg to my extremely forward horse. First I had to teach Kachina that a little leg doesn't mean to start running. Second I had to learn to recognize when I needed leg. Most recently, I have been working on forcing myself to add leg; my conscious mind will know I need to, but it takes a couple circles and much convincing to get that message to trickle down and have my legs actually obey. Friday's ride was the first one where I felt that adding leg was finally becoming my automatic first response when it was needed. I'm sure this is something I will struggle with more in the future, but this ride was a major step forward and that's exciting.

After my ride, me and two of the other boarders decided to let our mares loose in the arena to roll and play (everyone was done riding, and our three mares live beside each other so we know they get along). They currently had a lot of spring energy because they ran and played for a lot longer than normal. It made me even prouder of Kachina that she had behaved so well for our ride. 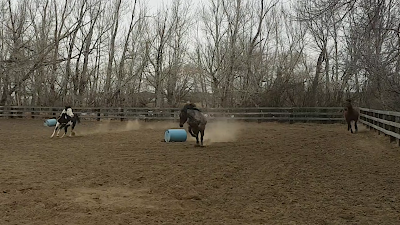 It was awesome to get to ride outside in the sunshine again, I'm hoping to do a lot more of that in the coming months!