When Sandra rode Kachina in the clinic, it gave me a great opportunity to see how Kachina looks from the ground when she is tense. I was surprised to discover that Kachina's gaits sometimes become lateral, though in hindsight it does make sense of some things. Of course being the special snowflake that she is, Kachina doesn't move laterally in what I would say is a normal way.

The most common type of lateral movement that I have heard about and learned to fear is the lateral walk. Kachina's walk is totally fine. It probably helps that we have done a ton of work at the walk and she doesn't get tense at the walk any longer. Even on her "bad" day, Kachina's walk was loose and swinging and looked great.


Instead, she got lateral in the trot! Yes, the trot, that two-beat diagonal gait that is so simple, my horse has figured out how to screw it up. I mentioned in my typical ride post that sometimes she reaches an extra level of tension in trot that I can feel a difference in and that she sometimes breaks to canter from. It turns out that what I was feeling was her going into a lateral pace. It happened a couple times actually, but the biggest moment was in the corner of the circle right in front of me. Sandra and I caught it at the same time. I recognized the movement of her back and neck that I know the feeling of from being in the saddle, but this time, from the ground I could see that her trot had stopped being a trot and she was moving in parallel pairs of legs instead of diagonal. She will do it for a few strides, then go back to a normal trot. I never realized what was happening before because I was not expecting that to be the answer, also I've never seen her do it on the lunge. It makes perfect sense now that she will sometimes pick up a canter in that moment because that's probably just as easy for her to do as transitioning back to a normal trot. This discovery doesn't really change how I will ride, but it is very interesting to know. The pacing seems to be a symptom of being extremely hollow and tense, those are things I'm working on anyways. I blame the pacing Standardbred that Kachina shares a pen with for being a bad influence! lol! 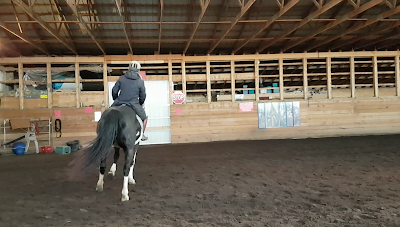 That's not all. Kachina can also get lateral in the canter. I have driven myself crazy watching videos in slow motion to try and figure out exactly what she does with her legs in the canter. Part of the problem is that she's far from consistent. Sometimes her gait is a pure 3-beat, at other times she moves laterally. A lot of the time her canter looks good in real time, it's only when you slow it down and really focus that you see the abnormalities. Despite the canter becoming lateral, her hind end stays active, and it's not 4-beat, more like 3-beats but the wrong 3-beats. Sometimes it even seems more like 2 beats with the legs moving in parallel pairs, but still different than her lateral trot. One thing that does make sense is why I sometimes have a hard time figuring out what lead Kachina is on. When her two outside legs swing forward together it feels to me like the outside fore is leading (outside lead).

Purity of gaits is pretty critical in dressage and so part of me worries about that. On the other hand, I know that Kachina frequently does have pure gaits, she only gets lateral for a few strides at a time and then goes back to normal. I think the whole problem is an issue with tension. It's something I will have to watch, but this was a bad day for Kachina and I am hopeful that the lateral moments will disappear as we make more progress with relaxation, suppleness and bend.


In other news, I haven't had a chance to ride much since the clinic. The weather took a serious turn for the worse. Right now it is -19C (-2F) with a windchill of -30C (-22F), and did I mention that the barn/arena are not heated (or insulated). Winter temperatures were seriously overdue but I'm still not thrilled about it.
Posted by AutonomousDressage