I recently posted about how Kachina is good for occasional pony rides when people I know come out to the barn.

Last weekend, my good friend L came to visit me for a few days. She isn't a rider, but she's spent enough time at her grandparent's farm and at various summer camps to be fairly competent on horseback. I brought her out to the barn to see and ride Kachina.


I'm pretty safety conscious, so as usual when anyone else rides my horse, I made sure L was outfitted with heeled boots and a helmet, tacked up western for extra security, warmed Kachina up myself first, and then clipped a lead rope to the halter to start my friend riding while I lunged Kachina around me for extra control.


Kachina was pretty good for L for the lunging portion. She wasn't on the bit, and she cantered once when we were trying to trot, but otherwise seemed good, and L was riding well. I unclipped them to let them wander around the arena by themselves, with the direction to stay at a walk.

They walked around in both direction for quite a while and it was going awesomely. Kachina really relaxed and started to stretch her neck out and down. L was easily able to direct her where she wanted to go. Kachina gave one tiny spook due to a bird and my friend calmly sat it and carried on like nothing happened which is exactly what Kachina needs. They did more walking around and changes of direction and all was good. For complete beginners, I would have ended the ride there (or on the lunge, depending), but L does have some experience riding and seemed to be riding well, so I said they could trot. I'm all about the disclaimers so I think my exact words were "you guys are doing really great so feel free to trot if you want to, I can't guarantee she won't run away or go faster but I leave the decision up to you". I partly said this because during my own ride, Kachina kept trying to canter (we had worked on canter transitions a lot my last ride), but her canter transitions were soft and she came back to me each time so I didn't really think there would be a problem. 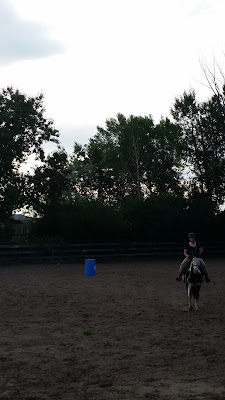 They started trotting. In the first lap (this was the huge outdoor arena so a lap is big), Kachina broke into a canter twice (and omg, such nice transitions!) but it was a nice canter and L got her back to the trot pretty quickly so I wasn't fussed. Then, Kachina broke into a canter again, but something spooked her and she went into a big runaway canter. She stayed on the rail but she really picked up speed and had her head straight up. L was clearly not in control any more. I'm really not a good instructor which is a problem in these situations but I was trying to give her simple instructions to "lean back", "pull one rein", "grab the horn with your other hand". Since Kachina had gone from a stretched out relaxed frame to one with giraffe head, her neck had shortened dramatically and L's reins were way too long be effective, and she didn't seem to know how to shorten them. I was shouting at Kachina to whoa and trying to use lunging body language, but Kachina was clearly in a mode where she was scaring herself with the speed and wasn't sure what to do or how to stop. Also, as L told me later, she was holding on for dear life and so essentially gripping hard with her legs and telling Kachina to go faster.

After a couple laps of runaway canter (it seemed to go both in slow motion and super fast so I can't recall how long exactly), L lost her seat and tumbled off in the corner. She hit the sand and rolled several feet. The second L came off, Kachina turned to the inside of the arena (away from L) and trotted right up to me, puffing. L quickly jumped to her feet and walked over to me too.


I felt so so bad that Kachina had run away with my friend and made her fall (though I know it wasn't out of meanness) and I apologized profusely, but L very good-naturedly shrugged off the incident. She did, however, decline to get back on Kachina. Kachina needed both a cool down and a good note to end the ride on so I got back up and schooled her for another 10-20 min. The second I got on, Kachina seemed to walk around extra carefully like "what happened? I don't want that to happen again". We did some relaxed walk circles and then worked on walk-trot-walk transitions, coming back down to walk whenever she started rushing at the trot or trying to canter. There were no further mishaps and we all came out of it none the worse for wear. L gave Kachina treats and pats afterwards so there were no hard feelings.

This runaway canter has only happened to me once before with Kachina and that was when she spooked and I lost my stirrups. I noticed a lot of similarities about that time and this time so I can draw some conclusions about Kachina's thoughts and actions when it happens. Normally, when Kachina spooks, she just puts on a little spurt of speed and then immediately calms down after a step or two. She is less balanced and comfortable at the canter though so if she spooks at the canter it becomes harder to slow down. If her rider isn't supporting her well with a solid seat and hand, she doesn't get that she needs to slow down. If her rider doesn't have a solid seat, attempts to turn her or stop her with rein or leg will just further freak her out and not be effective. She stays running because she is unbalanced and scared and doesn't understand how to stop. Once she does stop, she is as relieved as you are.


This incident brought up some more things to think about:
A) I'm not sure how to prevent this happening in the future, because I can generally catch her before it gets to that point when I ride myself. However, it could happen to me again if I lost my seat or stirrups again.
B) Does this mean Kachina needs more work at the canter right now to become more comfortable, or does it mean she isn't ready for the canter work yet?.
C) This is only the second time this has happened, but is there a chance it will turn into a dangerous bolting habit?
D) This further reinforces my knowledge that Kachina is not a beginner's horse, and I need to be extra careful about letting other people do anything more than walk with her.
E) I have recently wondered about riding Kachina with a looser rein and being more comfortable with less control, however, this taught me that while I do still need to encourage Kachina to stretch into longer contact, it is best for both of us if speed is strictly regulated, because it can get out of control pretty fast.
F) Kachina is not actually that easy of a horse to ride, I should give myself a bit more credit.
G) I should practice an emergency stop with Kachina sometimes and then teach it to anyone else who rides her - I did this with my last mare who had a tendency to bolt and buck, but Kachina's frame of mind is totally different when she does it so I've been hesitant to do anything that might risk unbalancing her. I should experiment with different ways to stop that will work for her (and that do not rely on seat).
H) Am I totally blowing a relatively minor incident way out of proportion and overthinking it to death? Probably haha 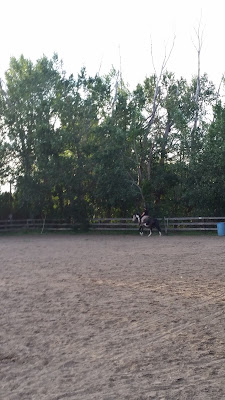 Has your horse ever tried to kill someone you like? (intentionally or unintentionally)
Posted by AutonomousDressage